Week after week I wake up on Sundays to a craving for either Spaghetti a la Carbonara, Steak & Eggs, or something else that’s on Prune’s brunch menu. I don’t mind waiting in line for an hour just to get my fill. It’s as if they put some addictive drug in their food, because even when I get my fix I’m back the next week for more.

Prune is a not a newcomer. Gabrielle Hamilton opened the restaurant in 1999 with a mission: her motto was, and remains, "cooking all of — and only — the foods I wanted to eat at home: trickless, gadgetless and pretenseless." Well, it turned out that a good majority of New York City also wants to eat what she wants to eat and cook too.

Prune has had a strong following since the beginning. The cuisine is more or less "colonial," if you must characterize it. For me I consider it comfort food, but not in the mac-and-cheese kind of way. Gabrielle takes influence from her French mother, who cooked under a war-time mentality, reminiscent of her own upbringing, though she did not live through war. So while fried sweetbreads, roast suckling pig, marinated anchovies might seem like adventurous foods, it’s home-style cooking for Gabrielle. The key here is making everyday dishes consistently well and presenting a menu that is simple but planned with care. Of course, not everything is so outrageous, as there are also classics like deviled eggs and creamed corn succotash on the dinner bar menu, and these really do conjure up a sense of home-style warmth.

It’s also the attitude and philosophy of this restaurant that I love so much. No frills, straightforward: come eat, have a good time, and be on your way. The staff at Prune are one big family who believe in the same principles. As a small restaurant that seats 30, there is none of that tension and division that other restaurants have between the front and the back of the house. Everyone extends courtesy to the other while working with the utmost efficiency.

And so it is with great pleasure that I honor Prune for continuously evoking cravings within me by dedicating this feature to a small restaurant that has had a huge impact on the culinary landscape of the city. 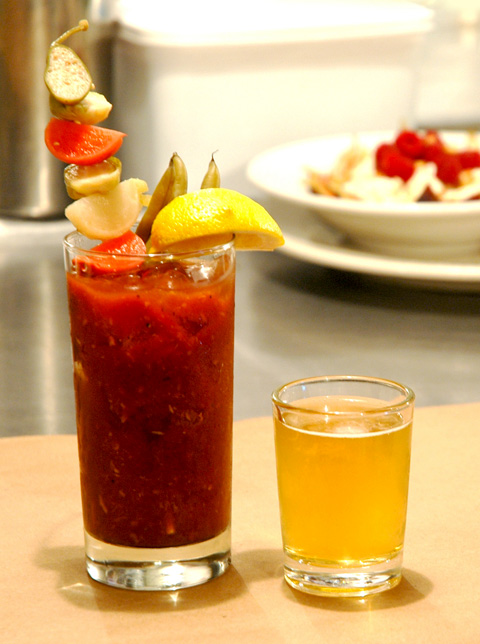 The is my favorite daytime cocktail. I had been searching around town for a good solid one for a long while until I recently stumbled upon Prune’s Bloody Mary list — the same day I also discovered one of Manhattan’s best brunches.

Most brunch cocktails are bluff drinks, a typical example being overly sweet mimosas made with... full article 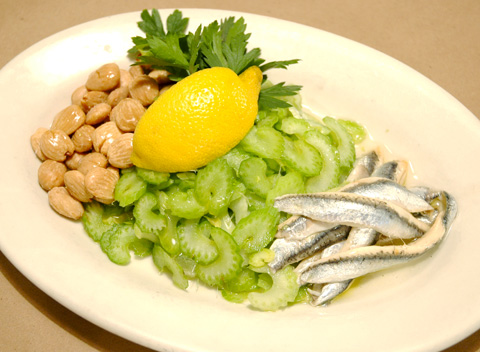 This dish is from the bar menu — a perfect choice as munchies with drinks, or as an appetizer for dinner. These anchovies are marinated in olive oil, vinegar and salt, and accompanied by thinly sliced celery hearts and toasted Spanish Marcona almonds, then drizzled with olive oil all over. Anchovies generally have a really strong... full article 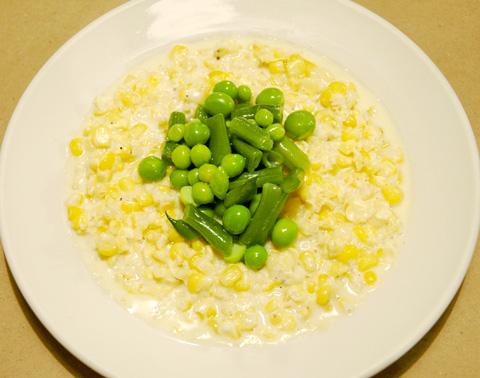 When I think succotash, Prune always comes to mind. One of Prune’s signature side dishes, this is a slight variation on the original introduced by Native Americans to the New England colonists: Traditionally a mix of green beans and corn. This is the quintessential summer dish, which is when the two main ingredients are in season.... full article 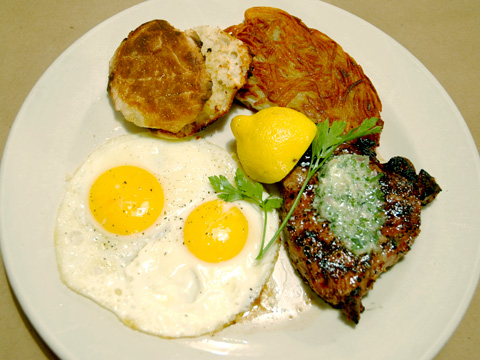 If I had to pick only one thing on the menu as my favorite, this would be it. The grilled dry-aged prime ribeye steak is perfect for me when it is raw and red on the inside and seared on the outside, dripping with parsley-shallot butter that is still melting when the dish arrives. You also get two eggs with the dish, referring of course to... full article 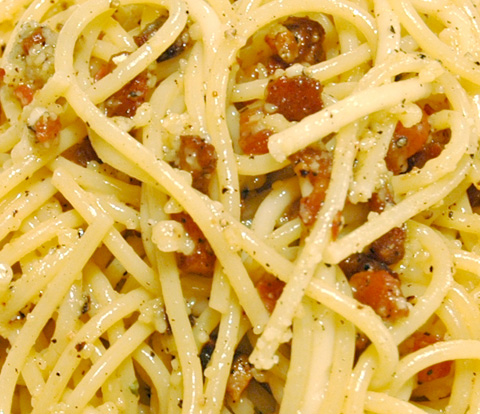 Initially I found it surprising to see a Carbonara on the brunch menu, but when I read the menu description it all made sense: “The Italian way to get your bacon and eggs … with pasta. And plenty of black pepper.” And indeed, even though the eggs are mixed in with the pasta and hardly visible, the combination of eggs, pancetta,... full article 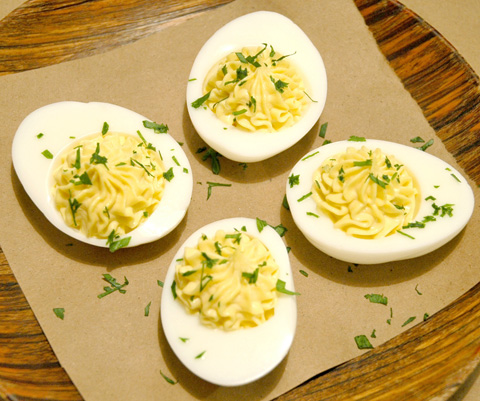 Another item found on the bar menu, deviled eggs, are a perfect snack. I always associate these treats as home party hors d’oeuvres — dozens on a platter ready to be picked up and devoured. The beauty of deviled eggs is that you can just keep eating them, which is not good if you are watching your cholesterol. At Prune, they serve four devils... full article 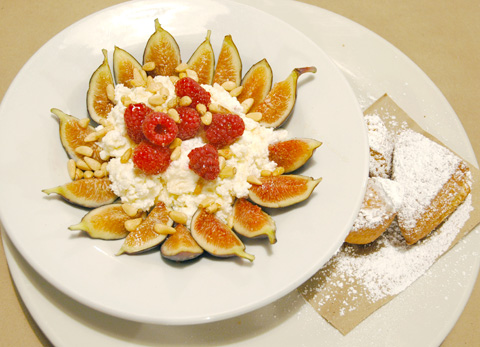 How do you describe heaven? Well, here’s one version: Take fresh, soft ricotta cheese from Joe’s Dairy (156 Sullivan Street), add seasonal fruits and toasted pine nuts, and top it off with honey. No, wait, I’m not done yet. Then serve this dish with two to three merveilles — deep-fried dough that’s rich in flour — on the side. One bite of... full article 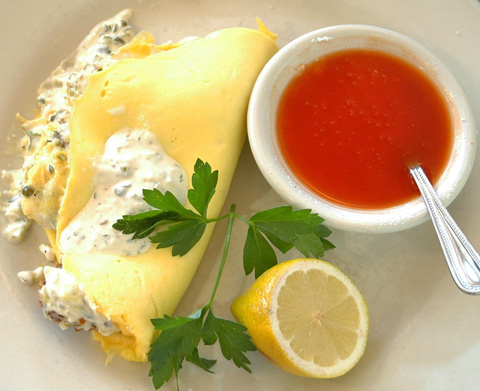 If you like omelettes and fried oysters then this is the dish for you. Deep-fried oysters are folded inside the omelette and topped with a remoulade sauce — a mayonnaise sauce mixed with mustard, horseradish, Worcestershire sauce and spices, usually served with fried seafood — both inside and out. On the side sits a small... full article 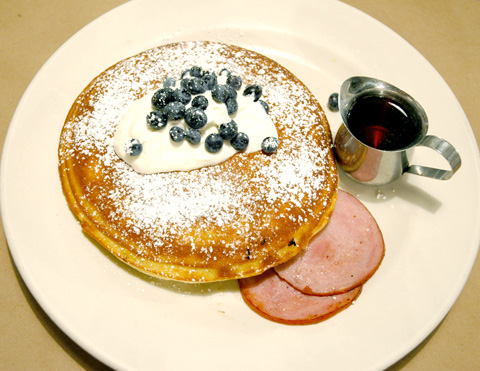 The Dutch style pancake is more like a cake than a pancake. It’s one large and thick individual pancake that has been baked in the oven. The texture is denser and the flavor richer than regular American pancakes, and so even with just one you have an extremely copious meal. At Prune it’s served with fruits baked within the pancake, and... full article