For part two of my feature on modern Chinese cuisine, I would like to share with you the amazing Chinese New Year’s Eve feast I had this year at my friend Shida Kuo’s home.

Shida is a modern sculptor who exhibits internationally and teaches at New York University. From the numerous interviews I have conducted with chefs, it goes without saying that cooking is a form of art and that chefs are all creatives in their own right. Perhaps we can call them culinary artists. So there is a natural link and progression between Shida’s artistic and culinary talent. When not working in his studio or teaching, he is often hosting friends and family in his East Village loft for a nice meal. Everyone is having fun eating, chatting and being merry while Shida’s concocting delicious creations in his professional, open kitchen.

Shida’s place is the perfect setting for a speakeasy. Together with wife, Benrei, and their son, Shane, the Kuo family has created a very warm atmosphere that is adorned with simple art pieces. While their sensibility is modern, it is understated and easy-going. One always feels welcomed and relaxed at the Kuo’s. They pay attention to details, but they make everything seem effortless and seamless. It is rare to find this kind of gracefulness and hospitality in New York or anywhere these days.

Once Shida had decided to host New Year’s Eve dinner for eight at his place, he immediately started his due diligence. The menu arrived at each invitee’s email inbox a week prior, with his carefully planned pairings of the entire banquet. When I say pairing, I also mean food and beverage pairing, but in Chinese cuisine, the pairing of the food courses is first and foremost. One must plan out the exact balance and rhythm of the meal, taking into consideration whether each dish is light or heavy, dry or saucy, spicy or mild, greasy or clean. There are endless details to examine. In Chinese culture, the three basics of cuisine are color, aroma and taste. This means that, at the very minimum, a dish must arouse those three senses.

The menu, which I have reproduced in this feature on its own page, consisted of nine courses, followed by tea and dessert. (As a side note, three is an auspicious number so multiples of three are also auspicious.) You’ll notice that Shida’s menu places lighter dishes that act as palate cleansers after heavier dishes. For example, the stir-fried bean sprout after the deep-fried frog legs and meatballs, and the boiled Chinese broccoli rabe after the pork belly sandwich.

To continue in the auspicious vein, I am introducing nine of those dishes (though I’ve chosen to swap the last course, long life greens, for one of my favorite teas, oolong).

With a meal like this to start 2006, I think the year of the dog will bring plenty of good fortune, hopefully for all of us.

Here’s a look at the menu: 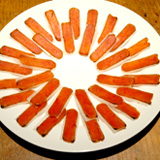 
Mullet roe is a must-have dish in the Taiwanese celebration of Chinese New Year. It is believed that eating mullet roe on New Year’s Eve is propitious and will bring good fortune for the coming year. The southern coastline of Taiwan is famous for its production of mullet roe — a Japanese favorite since it is extremely expensive in Japan and the Taiwanese productions are tastier. Mullet roe is processed by sun drying and then curing before reshaping and packaging. Since it is rather salty, it is an ideal dish to have as a snack with alcohol. At Shida’s, he seared the mullet roe just enough so that the outside tasted a little smoky, then arranged the mullet roe pieces on slices of white radish. The white radish acts as a cooling and refreshing agent to balance the saltiness of the mullet roe. This was the perfect start to dinner paired with Japanese sake. What a nice way to ease into a new year! 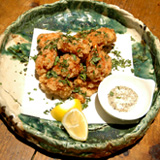 
It’s hard to tell that these little deep-fried treats are frog legs. In fact, if you didn’t know, you would probably think that you were eating fried-chicken (well, chicken with small legs, maybe). The fact that the frog legs are marinated with ginger, garlic and shallots adds a layer of complexity to the flavor, although the outcome is subtle. Topped with chopped Thai basil, squeeze a little lemon on a deep-fried frog leg and dip it in a little salt and pepper and voilà. Who knew frogs could be so tasty?!

Note: The great thing about Shida being a sculptor is that he can make specific dishware for his dinners with a little planning. An Oribe-style ceramic plate was conceived to perfectly serve this dish for our Chinese New Year’s Eve dinner. 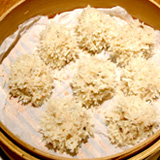 
Okay, I swear it sounds much better in Chinese. It’s supposed to be a euphemism: the beautiful and glistening sticky rice covers the meatballs so that they look like pearls. Well, not only do these meatballs look good but they are also delicious. I grew up eating pearl meatballs. Meatballs are generally associated with comfort food, so think about how much fun these meatballs would be. Tender on the inside and chewy on the outside. If you like sticky rice, you can’t go wrong with pearl meatballs. 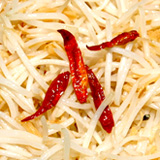 
I’m sure you are thinking, “Bean sprouts. What’s the big deal? They’re cheap and don’t have much taste.” I think bean sprouts suffer a bad rep due to the western creation of chop suey. Shida’s wife, Benrei, will spend an hour cleaing the mung bean sprouts, making sure that the heads are removed and only the clean body sprouts are remaining. Yes, this can be a truly labor-intensive dish. Like the Kuo’s, this is a subtle and understated dish. Shida stir-fries the sprouts with dried scallops (a popular ingredient to add to vegetable dishes), which adds a rich flavor, red chili peppers, which aren’t really spicy, and a dash of Taiwanese rice wine. This dish is so clean-tasting you feel like you are cleansing your soul with every bite you take. The sprouts are slightly crunchy in texture but so easy to eat that they just glide down your throat. Believe me, you’ve never imagined that you could be asking for seconds or thirds of bean sprouts, but you’re bound to not get enough of Shida’s. Bean sprouts are another essential dish on a Chinese New Year’s Eve dinner menu as we take the "sprouting" meaning very literally and hope to prosper by eating this vegetable. 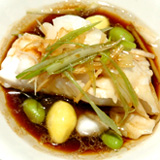 
For Chinese New Year, you must have fish. Phonetically, the word for fish sounds the same as the word “excess.” So in order to have excess this year, as in to be prosperous, you must have fish. Steamed fish usually comes whole, but Shida makes a variation using fillets. He still cooks it the traditional way with ginger scallion and soy sauce and adds a touch of ginko nuts. Each of the fillets was placed in a small seashell dish. The fillets didn’t lose any of the taste that the whole fish would have retained, and the circular theme of the plates stayed in sync with tradition — circles are another big theme during Chinese New Year as they signify reunions. We want to make sure that we always return to share joyous meals and occasions with our loved ones. 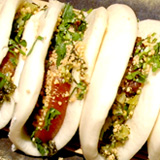 
This is a popular Taiwanese dish. The bun that sandwiches the pork belly and other ingredients is light and fluffy, like the skin of a char-sui bao, but completely smooth. Inside, along with a slice of soy sauce braised pork belly — yummy! I live for pork belly — are an array of flavors that you might find delightfully surprising: ground peanuts (powdery), sour mustard (which is pickled mustard greens) and cilantro. It’s a mixture of sweet, savory and sour flavors all held in check and balance by the neutral, steamed white bun. It tastes so good that you will want more than one, but never underestimate the power of the pork belly. You will be aching later if you decide to be a glutton. 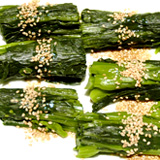 
Chinese generally don’t eat cold dishes. We do have some starters like jellyfish and other cold cuts, but there is definitely no habit of eating vegetables cold. This dish is inspired by the Japanese ohitashi — boiled spinach served cold with either sesame or soy sauce. Shida’s brilliance strikes once again as he chooses to forgo spinach and uses Chinese broccoli rabe instead, which is much softer in texture. Dressed in sesame oil and sesame seeds, this dish acted as a course in itself but also severed as palate cleanser between heavier dishes. Such a simple idea that makes you wonder how a vegetable could taste so light and so good. 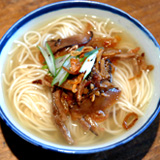 
Shida’s mother’s recipe for noodle soup is awesome. Here we have another demonstration of the Chinese using dried seafood like shrimp and squid to infuse rich flavor into a dish. Dried ingredients can keep for a long time around the house and act as easy flavor enhancers. Deep-fried shallots are used heavily in Taiwanese as well as other Southeast Asian cuisines. They add a lot of flavor to a dish without too much preparation. If I haven’t tired you out with all the superstitious talk, allow me one last insert: noodles are a symbol of long life. So don’t forget to have noodles on New Year’s Eve and on your birthday. 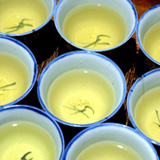 
Taiwan is famous for it’s sophisticated and diversified crops of oolong tea. Just as one studies and tastes wines, there is an enormous amount of information to learn about teas, and to taste them is an even better treat. Like wine, you can judge a tea by its color and nose too. The fun part about tea is that there are definite etiquettes and ceremonies one can perform. The High Mountain Oolong tea Shida brought back from Taiwan is of extremely high quality and pricey. This tea has a mild natural taste and is not that bitter. It should be brewed to a nice golden hue, and it leaves a pleasant and lasting aftertaste. At the end of a meal, enjoying some tea with interesting conversation is a relaxing way to wind down from a fabulous meal.