Parker on Champagne: What's in a Vintage?

Champagne. In a nanosecond a simple three-syllable French word conjures up a world of frivolity and festivity. The potent suggestiveness of this word is impressive, yet the image itself can be misleading. Similarly high-profiled wines from Bordeaux or Napa are considered primarily fine wines and escape the burden of this over-defined imagery. It is unfortunate that Champagne is pigeonholed thus, as the emblem and drink of celebration, since as a result its vinous qualities are too easily overlooked.

Robert M. Parker, Jr., the world’s most powerful and influential wine critic, explains in his new book, The World’s Greatest Wine Estates: A Modern Perspective (Simon & Schuster, $75), in detail, house by house, why Champagne is a noble wine after all. He states up front that this is the finest sparkling wine in the world and then goes on to focus on the top-of-the-line vintage wines from a selection of houses. In his elaborate description of the winemaking process and the singularity of the different styles of each of the seven Champagne houses he highlights, the reader gets a real sense of the grandeur and complexity of this exceptional wine.

I would like to take you on a tour of the Champagne section of Mr. Parker’s book. But first, let me review with you how he defines, at the beginning of the book, what constitutes “greatness” when assessing any wine. The prerequisites Parker lists are a wine’s ability to please the palate and the intellect, to hold the taster’s interest, to offer intense aromas and flavors without heaviness, to taste better with each sip, to improve with age, to reflect the place of origin, and lastly to display the passion and commitment of the producers.

In his brief introduction to the Champagne section, the author states: “French Champagne is irrefutably the finest sparkling wine in the world… [it] stands alone at the top of the qualitative pyramid for sparkling wines.” He then lists all the different styles of Champagne, but emphasizes that vintage cuvées are at the crown of this pyramid since they are only produced in the best years and reveal more depth and flavor than non-vintage wines.

Parker’s focus is thus limited to the vintage wines of each house. Non-vintage wines are blends of wines from several vintages and are intended to promise consistency year after year. But vintage cuvées are special and vary greatly from year to year since they show only the individual characteristics of the year in which they were harvested. This is a fantastic way to discuss the merits of each house. The author’s decision to focus only on vintage wines falls in line with his premise of concentrating on wines of exceptional quality, each with the ability to improve with age and to display a singular personality.

Organized alphabetically — and not by preference — the seven houses he selects to showcase are: Bollinger, Krug, Moët & Chandon, Pol Roger, Louis Roederer, Salon, and Veuve Clicquot. Here is a synopsis of the most venerable wines from four of the houses:

Bollinger Vieilles Vignes Françaises
Still family-owned, Bollinger is known for being meticulous and hands-on in its production method. This jewel of a Champagne house is renowned for its Pinot Noir-predominant style wines. There are four wines in its vintage line: Grande Année, Grande Année Rosé, R.D., and the hard-to-come-by Vieilles Vignes Françaises. The latter limited-production wine comes from 1.5 acres divided among three parcels of grand cru Pinot Noir vineyards in Aÿ and Bouzy. The rarity of this wine lies in its usage of all pre-phylloxera vines. For the 1996 vintage, production was at a mere 2,600 bottles.

Parker does an outstanding job of highlighting the merits of this house, noting the “aging [of] its reserve wines in magnums that are cork-sealed” and observing that Bollinger is the sole house “that still employs a full-time cooper” to take care of a large quantity of wines that are fermented in small oak barrels. Although I really wished I hadn’t missed Bollinger’s full-time cooper by minutes the day I visited the cooperage, I did get to see one of the mythical VV parcels right behind the Bollinger maison. Just this detail made my trip.

Moët & Chandon Dom Pérignon
This wine is notoriously the most famous high-end Champagne in the world and I was curious to see how Parker would present it.  He was very fair in his judgment as he acknowledged all the myth surrounding the production and then brought it down to earth by stating outright that Dom Pérignon “can be disappointing in certain vintages (1992 and 1993), but its most recent great vintages (1990 and 1996) are flawless wines of extraordinary intensity and personality.” He actually refers to his point rating system along with tasting notes for the three recent vintages: 1996, 1995, and 1990. All 95 points and higher, 1996 is his obvious favorite at 98 points.

Salon
If there is one Champagne that achieves Parker’s definition of greatness by being a wine of singular personality, it is Salon. This renowned house produces only one Champagne. Salon is a name that impresses and intimidates, but few consumers have any idea what the real cachet is behind this wine. The reader learns that Salon’s production is just over 4,000 cases in years that it deems exceptional and at that it only produces one vintage Champagne (solely from Chardonnay of the coveted grand cru village, Le Mesnil-sur-Oger).

This is a Champagne to stow away for a decade or decades, as Parker vouches “a 1964 tasted in 2002 was still spectacular.” The high acidity and the forgoing of malolactic fermentation are ideal for allowing the wines to age and evolve over a long period. Perfection is reflected in Salon’s rare appearance: The house has only released 32 vintages since it was founded in 1921. I had the opportunity to taste the 1988 vintage recently and was in awe of how youthful it still is. The piercing acidity is redolent of green apples rounded by luscious honey. I couldn’t help imagining what it will be like to re-taste this wine in five to ten years in its full maturity.

Veuve Clicquot La Grande Dame
Part of the luxury goods group LVMH and with the largest Champagne production per annum of all of the houses — exceeding 60 million bottles — Veuve Clicquot is known as the standard Champagne by consumers around the globe. As a result, the house is often snubbed by connoisseurs for being a highly marketed and big-name brand. La Grand Dame from Veuve Clicquot is one of the most high-profiled prestige cuvées worldwide, and the story behind this wine has been as well-marketed among consumers as its Yellow Label house Champagne.

One naturally questions whether quality is compromised by the large volume (Parker notes that production figures are confidential). However, the author sees through the hype and even ignores the stigma of overproduction as he assesses the actual virtues of the grand old lady: “Despite what is a relatively large production for a luxury cuvée, [it] can age for 25-30 years in the best vintages… It is a quite ripe, very deep, and relatively full-bodied style of Champagne that handsomely repays ageing. The great recent vintages for my palate have been 1996, 1990, and 1985.”

Of the rare La Grande Dame Rosé, Parker has just one sentence saying it is seldom seen on the market. This also marks the end of the entire Champagne section and I felt I was left hanging. I would have loved to learn a bit more about what makes this wine so rare, and also to hear Parker’s assessment.

Parker is often attacked for using the 100-point scale for rating wines, so it is interesting that the Champagne section of The World’s Greatest Wine Estates is the only chapter where he shies away from using his signature scoring paired with tasting notes (except for the three vintages of Dom Pérignon). The focus here is instead on the specific blends of the wines and the best vintages of each house.

The art of blending is at the very heart of Champagne making. Therefore, the winemaker plays a very crucial role, especially since we are talking about blending vins clairs (still wines). In making these blending judgments, it is essential to be able to foresee what the wine will taste like when the texture of bubbles is introduced, as well as how it will evolve, since the wines will need a minimum period of ageing before they are released. Parker pays a lot of attention to the blending, and he provides breakdowns of the blends throughout the section. A good example of this is his list of blends for vintage Krug dating from 1959 (50% Pinot Noir, 15% Pinot Meunier, 35% Chardonnay) to 1989 (47% Pinot Noir, 24% Pinot Meunier, 29% Chardonnay).

The argument can be made that a Champagne house should be judged by its basic non-vintage rather than its vintage wine. The logic of this is that the most difficult challenge is to replicate consistency from blending grapes of different vintages, different varietals, and different parcels on an annual basis. Vintage wines, on the other hand, are only declared in years when the harvest is exceptional, so the wine is already guaranteed to be of a superior quality. The final blend becomes more of a question of what style of wine the winemaker aspires to create.

Having said this, I couldn’t agree more with Parker’s focus on the vintage aspect of Champagne. These are the wines that come from the best parcels, are pampered in their production and cellaring processes, will age, develop, and evolve, and then be followed for years or even decades to come. In a way, this really manifests the strength of a good Champagne. Since most people don’t readily comprehend the potential for ageing Champagne, they wonder what the point is in risking the loss of bubbles (which for most is the whole point of this wine). What happens to the bubbles? As anyone who has had a good bottle of older Champagne will tell you, the bubbles are less assertive. But they are still there, and the Champagne drinks like an older wine: mature, complex, and simply beautiful.

On this point of anticipating ageing in a vintage Champagne, Parker ends on a note of, well, anticipation. He provides a list in the last few pages of his book with the heading “Future Stars: Some Prospects to Think About,” and here he foretells which wines in each region will move to the top. But where are the Champagne stars? Parker omits up-and-coming Champagne houses in this section and the omission is glaring. The Champagne industry is incredibly dynamic right now, with so many grower-producers sharing the stage with the top houses. After an inspiring introduction to the most venerable big houses, why not give the readers a tantalizing hint of what to look forward to? Where are producers like Egly-Ouriet, Pierre Gimonnet, Bruno Paillard, Jacques Selosse, and Vilmart? 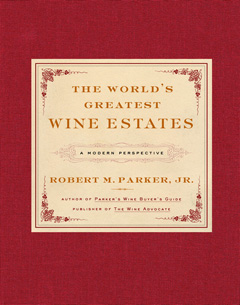 Robert M. Parker, Jr., the world’s most powerful and influential wine critic, explains in his new book, The World’s Greatest Wine Estates: A Modern Perspective, in detail, house by house, why Champagne is a noble wine after all. He states up front that this is the finest sparkling wine in the world and then goes on to... full article