While researching coconut foods, I was invited by Amy Besa, co-owner of Filipino restaurant, Cendrillon (now closed), to learn how to make fresh-squeezed coconut milk.

Sous chef Perry Mamaril, the “coconut expert,” walked me through the entire process and then showed me how to make suman (steamed rice cake) with the milk.

Coconuts are available at the West Indian grocery stores in Brooklyn. Here we see mature coconuts. Perry uses a knife to shave off the hair. 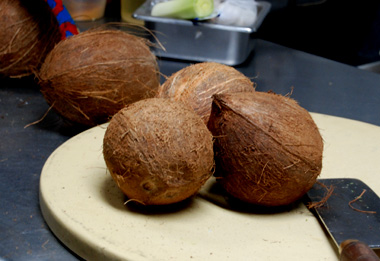 He then uses the back of the knife to strike hard the center of each coconut, until it breaks into halves. Once opened, the juice is drained. 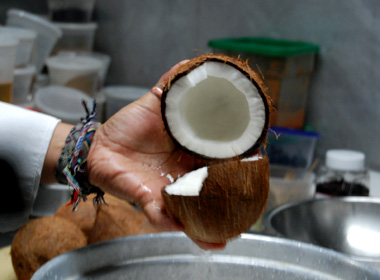 And the coconut halves are washed with water. 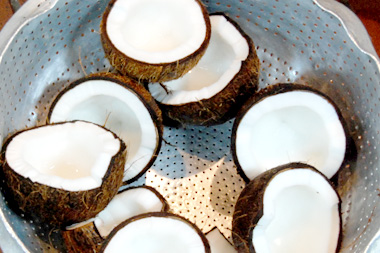 Then he sits on the “horse,” which is the grater — a stool with a blade with serrated edges attached. Quite phallic! 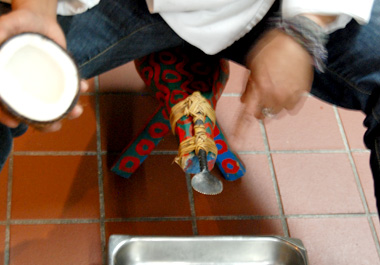 And very skillfully, he grates the coconuts by circling the coconut halves over the blade in quick, smooth motions to produce shreds of coconut meat. 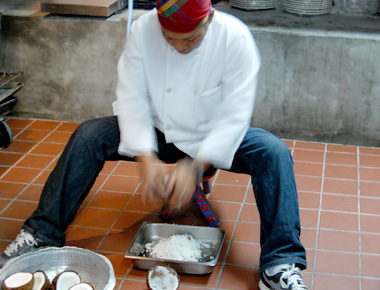 Here’s the resulting pan of the snowlike shreds of four coconuts. 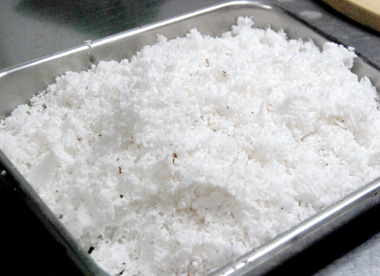 Squeezing the coconut shreds naturally produces milk (high in oil and sugar content). To create a greater volume of milk, Perry boiled water and poured it over the shreds, letting it soak for a couple of minutes before squeezing again. 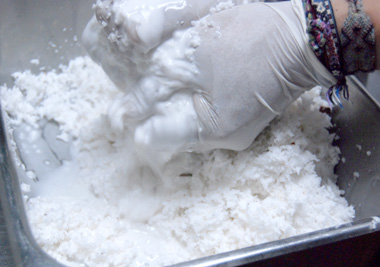 And here you have freshly squeezed, incredibly fragrant coconut milk. 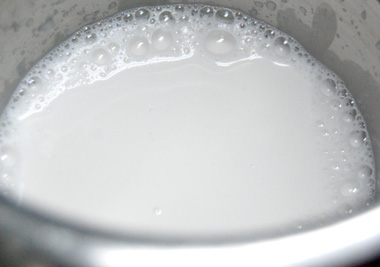 Demonstrating a dish that uses coconut milk, he made a special suman (steamed rice cake) with purple diket (glutinous) rice from the rice terraces of the Philippines. The rice is heirloom (grain passed down from one generation to another) and is grown organically and purchased at fair trade prices. 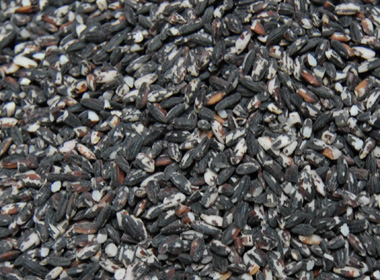 The heirloom rice is first soaked. It can be soaked overnight, but we only soaked it for about half an hour, so it would be al dente when steamed. 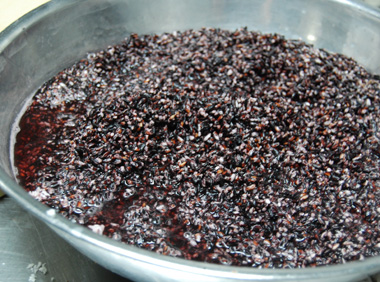 Perry first heated the fresh-squeezed coconut milk in a large wok, and then added the drained heirloom rice. He cooks until the coconut milk is completely absorbed and evaporated. The only other ingredient is coarse sea salt from the Philippines. 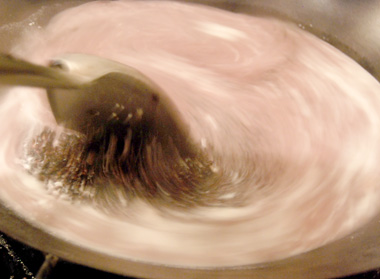 The cooked rice is then wrapped in banana leaves and steamed. 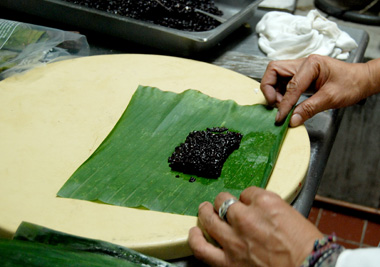 The suman is served with a sauce made from cooked coconut shreds and palm sugar. An absolute delight! 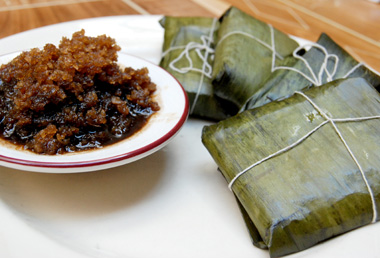 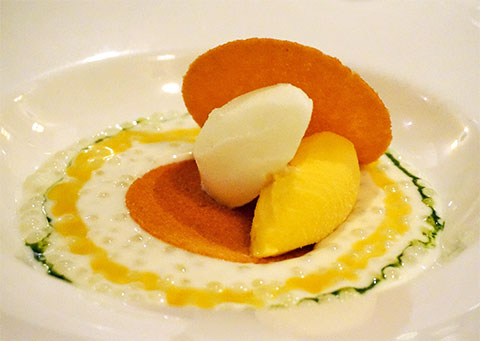 A. The North Fork Table & Inn

Pastry chef Claudia Fleming’s signature dish, coconut tapioca with passion fruit caramel, coconut and passion fruit sorbets, coconut wafers and basil syrup, rose to fame while she was at . It’s so popular that even though she now runs her own restaurant/bed and breakfast, , with husband Gerry Hayden,... full article

Scott Conant’s new and much anticipated restaurant, Scarpetta, serves a coconut panna cotta that is a star even amongst so many other delicious creations. Served in a guava purée with a scoop of coconut sorbet, pastry chef Gerry Minos captures the tropical spirit. Ah, coconut and guava! It takes me back to the beaches of... full article 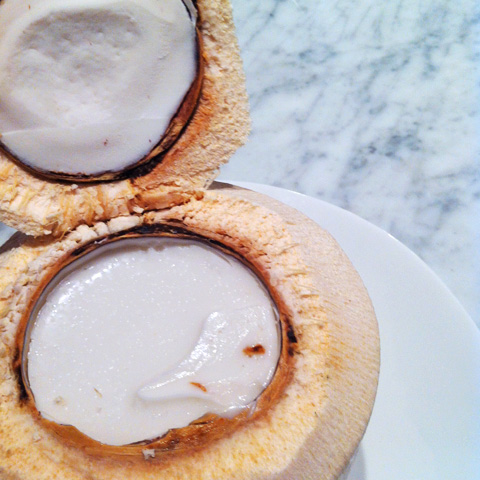 This is undoubtedly the most refreshing dessert I’ve ever tasted. Nyonya shaves off the green skin of the young coconut to create a container for the pudding. It’s as fresh and light as pure coconut water, only in pudding form. Such a cooling dessert, when I had it in 94-degree weather, it actually brought my body temperature down.... full article 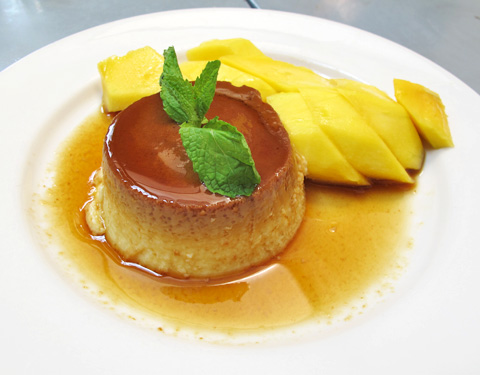 is like my home kitchen since I visit weekly for comfort and homestyle Southeast Asian cooking. The menu is simple, but the food is consistently satisfying. The coconut flan is smooth, rich coconut custard served with fresh cut mangos, and fortunately it’s on the menu year round. While the flan is sweet enough on its own,... full article 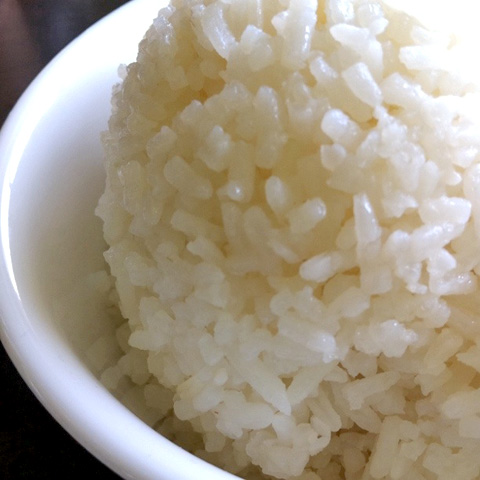 Coconut rice is a pretty simple concept; the Thai cook their wonderful Jamsine rice in coconut milk to get a more fragrant, rich flavor. The coconut rice at SriPraPhai is unrivaled in its fluffiness and vibrant aroma. It goes well with their curries (especially the !) and other spicy treats. The rice is savory, not sweet, so... full article

The cocktail bun originated in Hong Kong and is ubiquitous in Chinatown bakeries. A long butter roll (smooth, soft and fluffy) is stuffed with a mix of mashed buns, sugar and coconut shreds. This baked good was originally created to recycle leftover buns (similar to the origin of croutons), and the addition of coconut was to make it... full article