A Father and A Son

This past March at the three-star establishment PIC in Valence in the Rhône Valley, I was in charge of ordering the wines for our party. On a whim, I did something I’ve always wanted to do: order all Rhône whites to go with our food. I knew that if the guys did the ordering, this would be less likely to happen. In the Rhône with a fabulous list of local wines, how could I miss out on a chance to sample some great expressions of their whites. I ordered the 2007 Alain Graillot Crozes-Hermitage, then the 2006 Chapoutier Hermitage Chante Alouette, followed by the 2001 Château de la Gardine Châteauneuf-du-Pape.

Back in New York and still unable to get enough of Rhône whites, I was serendipitously invited to a dinner with Alain Dugas, the managing director and winemaker of Château La Nerthe, a top-notch Chateauneuf house. I was thrilled to continue my exploration through a conversation with an authority on the lesser-known whites of Rhône (white Chateauneuf only accounts for 5% of the appellation’s total production).

At the intimate dinner, my visit with Alain felt like chatting with an old friend. My French comes in very useful in my line of work. I wanted to know everything about Alain’s white Chateauneuf. Turns out I really hit the source: Cht La Nerthe was the first producer to make white Chateauneuf in 1775, and it is still the standard for this small category of wine style.

Alain had mentioned to me that his son is also a winemaker of rosé from Tavel in the Southern Rhône. Then, just this week, I came across the name Guillaume Dugas on a bottle of rosé. Aha! The son’s wine.

So I decided to have the father’s and son’s wines side-by-side with a Turkish dinner. Celia and I started dinner with Guillaume’s 2007 Prieuré de Montézargues ($17.95) with our mezze at , our favorite Turkish restaurant in the City. Even the fire from the hummus with harissa interacted nicely with the Tavel. The pairings were seamless. It’s been so long since I’ve had a Tavel, and the rediscovery was a true joy. Tavel has a bigger structure and more intense flavors than a pale onion-skin rosé from Provence. This deep cranberry-toned wine actually belongs in the rare category of rosés that can age a few years. Like his father’s wine, Guillaume’s 2007 also comes from 40-year-old vines. The blend is 55% Grenache Noir, 30% Cinsault, 13% Clairette and 2% mix of Syrah, Mourvèdre, Carignan and Bourboulenc. I enjoyed the deep red cherry and ripe strawberry flavors of the wine, especially with our varied mezze dishes.

With our fish tagine, we popped open the 2007 Cht La Nerthe Blanc ($49.95) from Guillaume’s dad. Who knew Rhône whites went so well with Turkish cuisine? The 2007 is a blend of 41% Grenache, 5% Bourboulenc, 12% Clairette, and 42% Roussanne. The wine is partly aged in oak (31%) and partly in stainless steel (69%). The result is a luscious white that holds up well to meat. Don’t get me wrong, it’s not a big, buttery wine; instead there are hints of honey and white flowers with some white pepper that adds a kick, layered with sharp citrus and orange blossom notes. This wine has fantastic weight. Very hard to part with the glass.

I know that if my dad, who is 8,000 miles away in Taipei, were in New York, he would have loved to join his daughters for this father-and-son wine tasting with Turkish cuisine.

Happy early Father’s Day to all the dads out there! 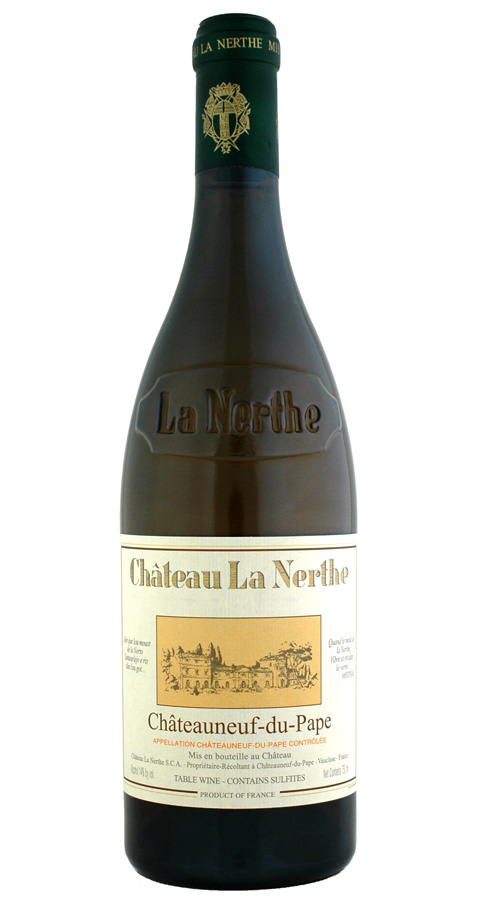 Celia and I started dinner with Guillaume’s 2007 Prieuré de Montézargues ($17.95) with our mezze at , our favorite Turkish restaurant in the City. Even the fire from the hummus with harissa interacted nicely with the Tavel. The pairings were seamless. It’s been so long since I’ve had a Tavel, and the rediscovery... full article