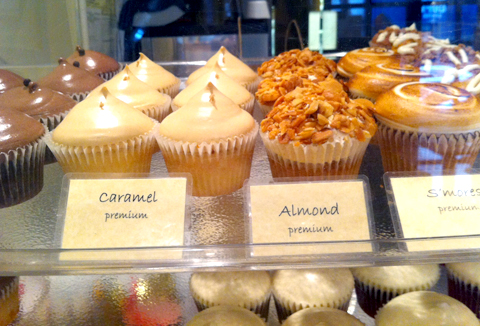 The vanilla cupcake at Dessert Club, ChikaLicious brings cupcakes to new heights. While vanilla may sound, well, vanilla, pastry chef Chika Tillman demonstrates with her vanilla icing on vanilla cake just how delicious it can be. The icing is light and fluffy, unlike any other in town. I love the buttercream that tops cupcakes, like at Cupcake Café, but Chika’s vanilla frosting is so light it’s like nibbling on a cloud. The cake is also soft and moist, which makes this a light refreshment that won’t weigh you down. These cupcakes are petite, so eating one is a treat, not an over indulgence. And it leaves room to try the other flavors, too — banana and coconut are two more favorites.

Dessert Club, ChikaLicious no longer makes vanilla cupcakes, but the texture of the icing and cupcake is consistent for most flavors.