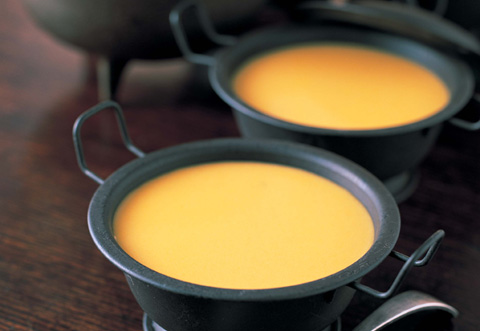 The Inn at Little Washington

The evening started at The Inn’s bar, Monkey Lounge. Since no aperitif is civilized without accompanying snacks, with my glass of champagne, there first came a basket of fresh thin Parmesan crisps, then popcorn seasoned with truffle oil and parsley, topped with black truffle shavings. Popcorn will never be the same.

Once I was seated in the main dining room, a plate of four canapés on individual spoons was served. Even the simplest sounding one of mozzarella and tomato was a burst of sheer ecstasy as the vibrant flavors popped in my mouth.

I found my meal at The Inn to be perfect. Choosing the tasting menu with paired wines gave me a comprehensive overview of Chef O’Connell’s cuisine. The seven-course tasting menu was just right in terms of quantity. Tasting menus often run ten to twelve courses, and inevitably right before the main course is served, I’ve run out of space, which affects my ability to taste and enjoy the food. But here at The Inn, I was able to savor every last bite and even polished off my dessert and the petits fours that followed.

And the highlights from the evening’s menu:

A tin of sin: American Ossetra caviar with a crab and cucumber rillette and brioche toast was one of my favorites. The presentation of a 30-gram Petrossian caviar tin as the container was a whimsical start to this dish. The crab and cucumber rillette is covered in a layer of caviar in the tin, so until you scoop out your first bite, you don’t see that there is more beyond just caviar in the tin. A mini slice of brioche toast is served on the side, which is clearly not enough to accompany the caviar and rillette, but the servers come with more as soon as it’s finished. The lighter flavor of the crab and cucumber rillette balanced the richness of the caviar, making this a scrumptious and, indeed, sinful appetizer.

For main, the pan seared Four Story Hill Farm’s pekin duck breast on sweet corn pudding with blackberry sauce was astonishing. This is only one of two main dishes I have enjoyed so much in recent years that I can remember its taste with perfect clarity (the other was the calotte de boeuf grillée at Per Se). Thin slices of duck meat top the corn pudding and blackberry and wine reduction. The duck was so tender that even with the sliver of fat on each piece, it was unbearably light on the palate, teasing me to want more. The sweetness of fresh corn is heavenly, and in the form of a smooth pudding, it was an elegant companion to the duck, while the lush blackberry sauce accented the two in perfect harmony.

Dessert was a limoncello soufflé that ended the meal on a beautiful note, light and graceful. Though I love lemons, I have a hard time with this Southern Italian lemon liqueur, as I find it too strong. But the brilliance of a limoncello soufflé is that the alcohol has evaporated and you are left with its essence but not its overwhelming flavor. Eating the soufflé was like light clouds dissolving in my mouth, and the lemon ice cream on top provided the sweet and tart aroma of the fruit that I love so dearly.

Dinner was followed by an opportunity to show my gratitude to the chef during a tour of the kitchen. The new state-of-the-art kitchen was completed five years ago as part of The Inn’s five-million-dollar renovation. It includes two “Chef’s Tables” that seat up to 12 diners who can see their food being prepared first hand. It also features a massive wall of windows, which, incredibly, allows Chef O’Connell to keep an eye on this 24-hour kitchen from his house. I bid farewell to the Pope of American Cuisine and headed out. Naturally, with the keys in the ignition, the car was waiting outside facing the road. They don’t miss a thing.

Photograph at the top of the page by Tim Turner.

The Inn at Little Washington