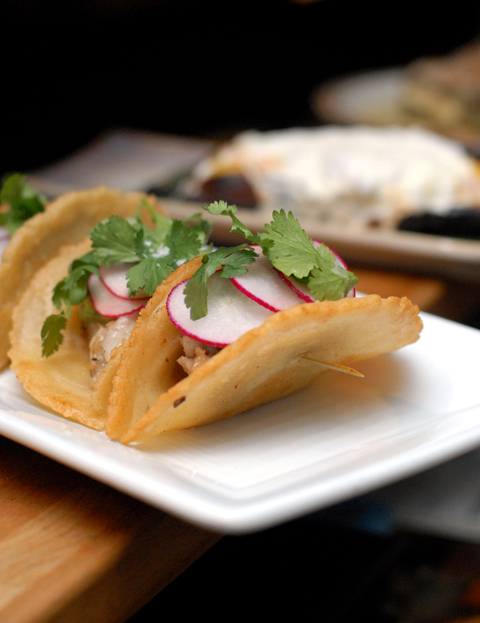 The menu changes daily at Palo Santo. Appetizers generally range from $6 to $14 and entrées from $17 to $24. However, from Sunday through Thursday, there is a three-course prix-fixe dinner (appetizer, entrée and dessert) for just $25. An absolute steal!

My friends and I had the taquitos de jabalí (wild boar – braised in a sofrito containing beer and chilies — and guacamole tacos), which were so delicious I could have had rounds of these for dinner. The plantano relleno, a slender baked plantain boat stuffed with bacalao (cod), cooked in a tomato-heavy sauce, and topped with Manchego cheese, was both beautiful and mouth-wateringly delicious. The chorizo casero (homemade pork liver sausage) with beets, radicchio and pork cracklings was another meaty but rewarding dish as the loose pork liver sausage played well with the different textures of the sliced beets, crisp radicchio and crunchy pork cracklings.

NOTE: Though the menu at Palo Santo changes daily, there is normally a taquito dish on the menu