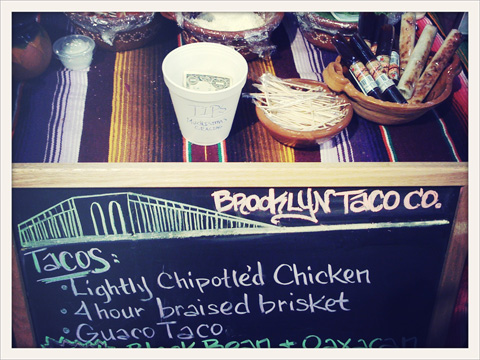 The “pop-up” concept is being pushed to its limits. Inspiring a sense of wonderment is the Brooklyn Taco Company pop-up at the weekend-only Artists & Fleas. While strolling by the market on a Sunday afternoon, I was lured in by Brooklyn Taco’s chalkboard sign advertising four-hour braised brisket tacos. Curiosity always gets the best of me, but often leads me to delicious discoveries.

The pop-up — with a short, seasonal menu — is a simple operation run by chef and co-founder Jesse Kramer. In addition to the spicy brisket with chilorio sauce ($4), the menu included the staple guaco taco ($3.75), light chipotle’d chicken ($3) and black bean Oaxaca cheese tamale ($3). I told Jesse that the only thing missing for me is a beer menu!

Kramer left Maialino to start this venture with his business partner. “Why Mexican?” I asked him. He said he was in awe of “the deep culinary culture” of Mexican cuisine. He’s interested in taking Mexican ingredients and interpreting them in his own way.

I love the entrepreneurial spirit of this taco venture. Take a peek at the Brooklyn Taco photo stream and you’ll see what I mean.