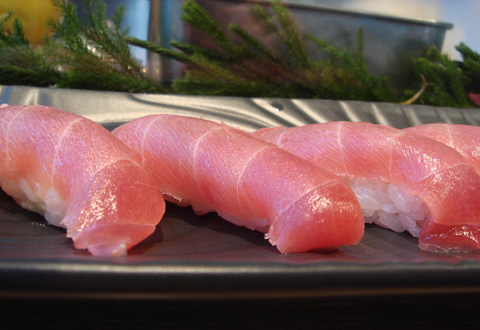 This is not the most amazing sushi, but for an airport it’s tremendous, and it’s a treat when you have a four-hour layover.

Having tried much of the fish on the menu, even though I’m usually more adventurous, the best value and quality is the chutoro (semi-fatty tuna) at ¥420 a piece (the otoro (fatty tuna) is ¥630 a piece, but the quality doesn’t warrant the additional ¥210).

On my way back from Tokyo to New York this time, I stopped by Sushi Kyotatsu for breakfast — four pieces of chutoro, a piece of engawa (halibut dorsal fin muscle), and a glass of seasonal draft beer. While it’s not common to have a beer or sushi for breakfast, when traveling, with appetites and mealtimes already off schedule, I wasn’t going to miss my traditional pit stop at Narita Airport’s Sushi Kyotatsu. And as long as I’m having sushi, I’m definitely having a beer! I felt great getting on the plane after this meal. If only U.S. airport eateries weren’t such greasy carb fests.