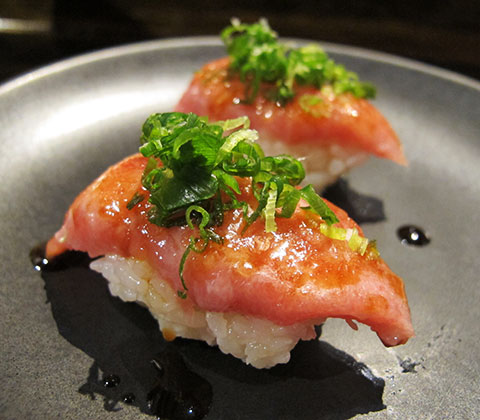 The Sasabune in Hawaii is much better than the one in New York. This one has been around for ten years so it’s definitely an established restaurant with its own rules. I am still dying to try the original Sasabune in L.A., which opened twenty-seven years ago. At Honolulu’s Sasabune, besides the “trust me” slogan, which is the common philosophy of all three restaurants, there is a large sign above the sushi bar that reads, “We reserve the right to not serve anyone for any reason.” Yikes! Chef Seiji Kumagawa is standoffish but his sushi is amazing. “Trust me” refers to the restaurant only serving omakase — chef’s choice — style. You definitely get some of the same choices at Sasabune New York, but there are two items from Hawaii I must point out. The first is the blue crab stuffed in grilled calamari. The blue crab roll, chef Kenji Takahashi’s specialty at Sasabune New York, ends the meal, and what a great way to finish. The blue crab filling in Honolulu is similar to the blue crab in Kenji’s blue crab roll, but stuffing it in calamari takes it to another dimension. Finally, the signature dish at Sasabune in Hawaii is the negitoro — scallions with fatty tuna. Negitoro most commonly comes in the form of a roll because the cost of toro is high, so this was originally the poor man’s way to enjoy some good fish. The negitoro in this case is nigiri zushi (hand pressed sushi). The decadent pieces of toro melt in your mouth. It is AMAZING! It’s a good thing that they give you two pieces, not one. The negitoro at Sasabune is worth living for and I can’t stop dreaming about it.