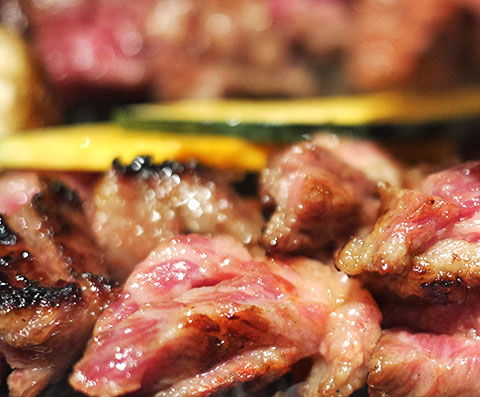 The more traditional preparation of ju muluk is to marinate the thick cuts of steak in sesame seed oil, salt and black pepper before grilling. Wonjo uses a soy sauce-based marinade on the special boneless short rib, which produces a flavor very similar to marinated kalbi (regular beef short ribs) — similar, but better. Since ju muluk is cut into cubes rather than slices like kalbi, even when the outside has caramelized and crisped into a savory and sweet layer of coal-seared fat, protein and marinade, the inside remains incredibly soft and moist (read: lots of delicious beef fat juices). Deeply flavorful, ju muluk just might replace kalbi in your meat rotation. It’s great with lettuce or rice sheet wrappers or on top of a spoonful of rice, and don’t forget to eat it with the green onion salad.