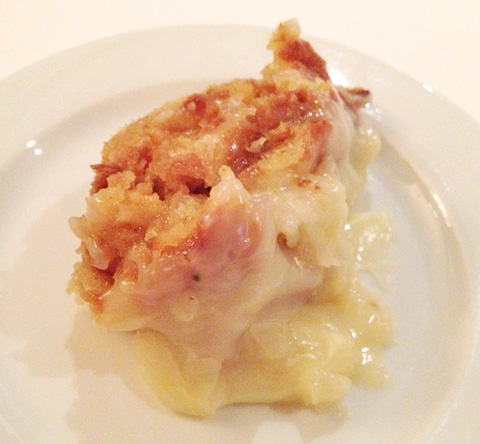 If you are into buffets, as certain members of my family ardently are, then Sunday brunch served in the stately main restaurant of Louisville’s venerable Seelbach Hilton, built in 1905, is a must. There’s a big hulking ice sculpture and an omelet station where a sweet sous chef named Joseph does double duty by flipping pancakes in the largest cast iron pan I’ve ever seen. As a northerner I loved the southern-inflected dishes the most: the deeply flavored barbecue-like beer-braised short ribs, collard greens, something called “roasted apple French toast soufflé” and superior biscuits.

What really stole the show, though, was the Oakroom’s signature bread pudding, which is a little (or big — this is a buffet, remember) slice of heaven. I roped pastry chef Kelsee Newman into spilling the secrets of the dessert. She takes a combination of leftover muffins, croissants, Danish pastries and “a few other breakfast breads,” tears them into pieces and soaks them overnight in a vanilla crème brûlée custard. That’s it, no spice, no raisins. The whole thing is placed in a large round cake pan and baked until soft, its texture somewhere between a soufflé and a cake. To gild the lily, Newman pours a thick layer of bourbon sauce, more like a creamy icing, over the pudding. The recipe is probably older than she is, handed down to her from pastry chef to pastry chef. Bread pudding, Newman explains, “is big in Kentucky,” but the problem with most versions is “they don’t soak enough.” Not a problem here.