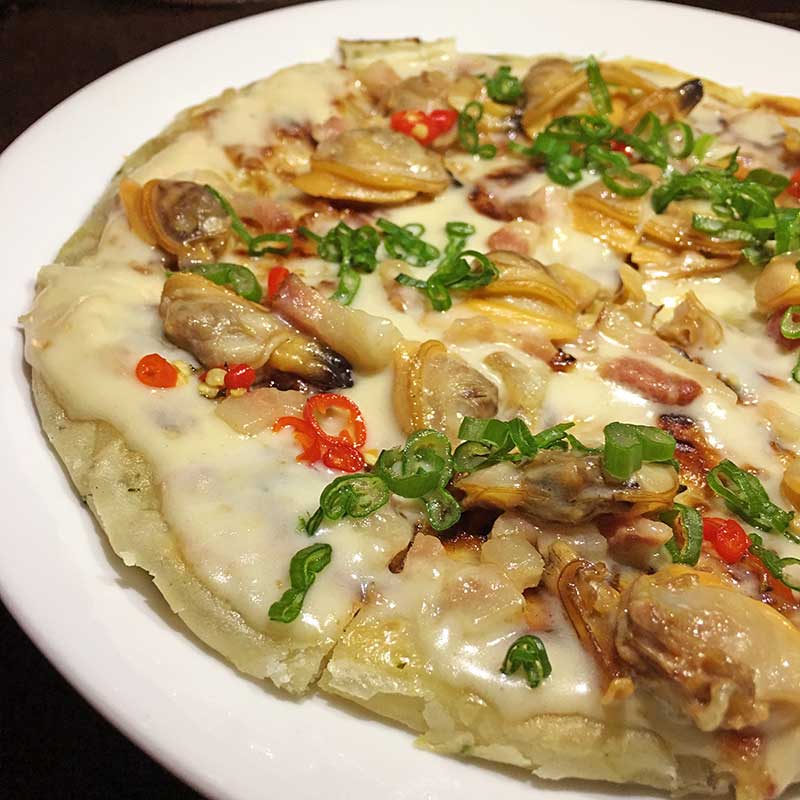 I have always enjoyed Chef Jonathan Wu’s cooking, from his pop-ups to his three-year old restaurant Fung Tu, because his food is so personal and creative. Jonathan takes his Chinese roots, culinary experience and dialogue with other chefs, and comes up with compelling dishes that are cerebral, experimental, and uniquely his. One example is his take on the scallion pancake: inspired by Franny’s clam pie, this twist on pizza is simultaneously Italian, and yet distinctively Chinese. While the form of the dish references the Italian pizza, the flavors of the pancake, steamed clams, and fresh chilies are classically Chinese. And with the added touches of cream sauce and bacon, this extremely satisfying starter offers depth and originality.

With the approach of Chinese New Year, I was curious to see what Jonathan has in store for the Year of the Rooster, and I grew increasingly excited as he explained each dish. On Chinese New Year’s Eve (January 27) and New Year’s Day (January 28), Fung Tu will offer three special prix-fixe menus: Cockerel ($68), Rooster ($88), and Deluxe Rooster ($111). As he spoke, Jonathan grew more and more animated, his passion barely contained as he revealed the inspiration and thought process behind the menus, bringing me into a reverie of this Chinese New Year feast.

His eyes sparkled as he talked about his ingenious red envelope scallop wonton dish with faux shark’s fin (an ingredient he’s been dying to try). The shape of the dumplings symbolizes traditional Chinese gold currency; Jonathan adds beet juice to the wonton dough to evoke the red envelopes that are traditionally exchanged during Chinese New Year. The dish is finished with golden beet “coins” for a colorful and auspicious accent.

No Chinese New Year dinner is complete without black moss, which in its Mandarin pronunciation “fa cai” is a homonym for “good fortune.” For the Rooster menus, Jonathan created a dish of fried Blue Point oysters in lettuce cups, brilliantly juxtaposed with the traditional black moss. Black moss and dried oyster is a classic pairing in Chinese cooking; Jonathan’s interpretation is a fresh and delicious-sounding spin on tradition.

Another menu item that caught my attention is an inventive starter of uni and jujube purée. Jujube is Chinese red date, which we commonly eat in desserts and soups. Jonathan told me the first time that he tasted jujubes, the funky flavor immediately reminded him of uni, so the pairing feels natural. Further, seeds symbolize fertility and uni in this context represents gold/prosperity, making the dish very propitious for the new year — see what I mean about cerebral and creative.

Given his penchant for experimentation, Jonathan runs the risk that every dish may not work out. Sometimes his playfulness just doesn’t translate into the equilibrium needed for a successful dish; some dishes could just be too difficult for the average diner to relate to. But this is also the fun and guts behind Jonathan’s cooking; each dish has a story capable of taking you on a journey, and I truly enjoy and admire the cuisine that he creates.