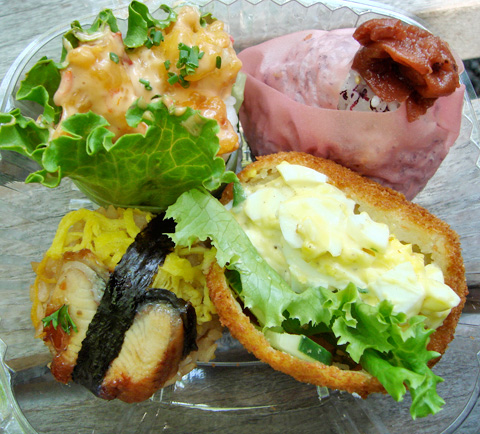 Japanese rice balls, called omusubi or onigiri, are a staple in Japanese cuisine. They’re a common fast food that can be found even in convenience stores, while a superior incarnate can be found in specialty omusubi stalls, among other purveyors of fine foods, in the gourmet basement food markets of department stores. As I share Japan’s love for omusubi, it was a wonderful surprise when Oms/b, a specialty rice ball store, opened in Midtown a couple of years ago. They have 48 types of rice balls, both traditional and inventive. Shrimp popcorn is a popular one, composed of shrimp tempura, rice mixed with chives, wrapped in lettuce, and topped with chili mayonnaise sauce. And with so much variety, they’re fun to try and there’s something for everyone. From 10am on, set A includes a choice of any three rice balls and a soup for $8.25.