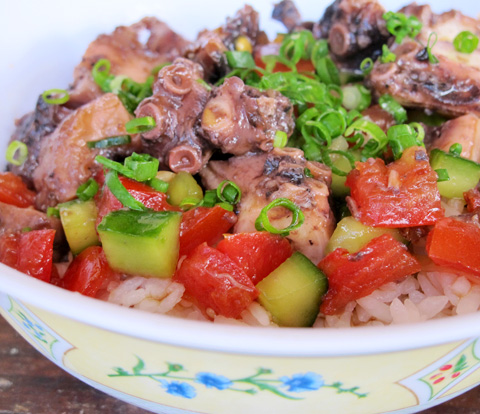 Heeia Pier is an unassuming little shack of a general store and deli that serves plate lunches at the end of He’eia Pier in Kaneohe. But this little store has a heart and a mission. When the original owners of the store decided to put it on the market, restaurateur Russ Inouye, a local Kaneohe resident, couldn’t bear to watch it get bought out by a corporate chain like Burger King or 7-Eleven and decided to put in his bid. He partnered with chef Mark Noguchi, a CIA grad and Town alum, who is a driving force in the Hawaii culinary community’s “eat local” movement, and together they are pushing new boundaries and further changing Hawaii’s culinary landscape. Chef Noguchi serves the much beloved Hawaiian staple of plate lunches but sources local ingredients and adds little gourmet touches; he’s elevating the cuisine but preserving the tradition at the same time. There are a handful of daily specials as well as perennial favorites, including the lauded best burger in town. When I visited, the octopus poke rice bowl special fully demonstrated how these are not your run of the mill plate lunches. The food is so fresh it speaks for itself.