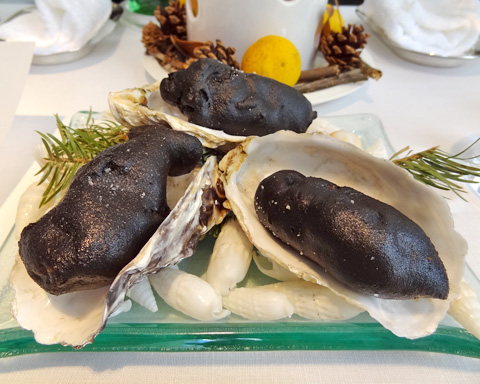 Oyster of the Forest

Yoshihiro Narisawa is the visionary Tokyo chef who has taken his ardent interests in conservation, sustainability and the elemental tastes of land and sea, applied them to modernist culinary techniques and created a cutting-edge, highly refined form of dining as theater. First, guests admire a cylindrical glass bowl full of yuzu_-flecked bread dough rising on a candle-warmed porcelain stand. The dish that appears next shocks with its resemblance to volcanic rock or shiny black mussels just pulled from the sea. They turn out to be giant, succulent oysters coated in a mixture of ground, carbonized _yuzu and beignet flour and then deep fried. The entire multi-course pageant might seem overwrought and precious (the fully baked bread, satisfyingly yeasty and elastic, will be served later) were the food not so delicious. In the end, you are left feeling as though you have just witnessed a highly stylized, 21st-century form of Shinto nature worship.