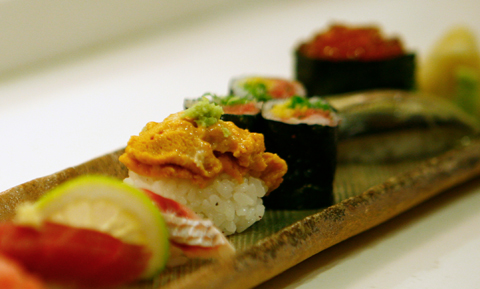 On a recent wintry night, my sister and I spent an unforgettable evening at Sushi Zen. We left our dinner fate in the hands of Master Sushi Chef Toshio Suzuki for an omakase meal. Sitting at the sushi bar, we had a blast chatting with him. As he and his chefs worked, we joyfully anticipated what would come next.

Our meal began with Chef Suzuki’s signature starter of seared big eye tuna and seasonal vegetables served with spicy grated daikon in ponzu sauce (a mixture of lemon and soy sauce). A classic dish, it was beautifully garnished with a thin slice of taro stem — something I’d never seen before. Following the tuna was an extravagant plate of sashimi, which included egg-yolk-dusted marinated tuna, toro (fatty tuna) and fluke liver wrapped with live fluke sashimi and then wrapped in leaves.

One of my favorite courses was the hassun, a traditional plate of bite-sized treats that change daily. We were served slices of grilled turban shell clam, butterbur flower tempura — a slightly bitter, but delicious, winter vegetable; and cooked blowfish jelly. The precision and beauty of the presentation made it all the more delicious. Next we received a bowl of cooked seasonable vegetables (takiawase) that included kabocha, carrot, taro, bamboo shoot, broccoli rabe, eggplant, nama yuba (tofu skin), and nama fu (wheat gluten cake). While this looks like a simple dish of cooked vegetables, preserving the essence and unity of flavors in preparation is no small feat.

Because it was a cold day, we were next served a monkfish hot pot with tofu, seasonal vegetables and mushrooms on a portable Japanese clay cooking stove.

Last but not least was the chef’s selection of sushi. We were handed piece after piece of fish carefully paired with homemade sauces — a good variety derived from vinegars, soy mirin and other sauces. I was stuffed by then but could never refuse sushi.

The Japanese say there’s a separate stomach, called betsubara, reserved for dessert. So, despite our protests, he insisted that we have dessert, and we ultimately agreed to share one. The homemade sorbets — white guava and cactus fruit — were superb! This sorbet reminded me of the guava I grew up on in Taiwan. You even get the gritty texture of the pulp in the ice.

I would enjoy Chef Suzuki’s company and conversation any day. The fact that he’s a master sushi chef just sweetens the deal.