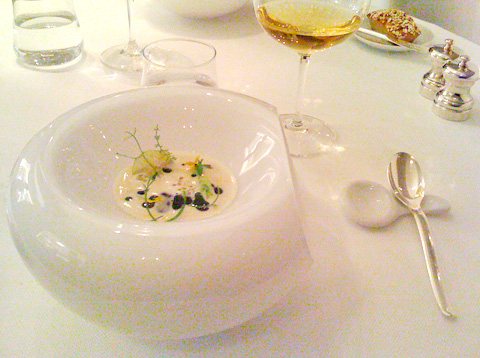 Five years ago, no one went to Copenhagen for the food. But in recent years, Denmark’s capital has become the hottest destination in Europe for foodies, with Chef René Redzepi leading the charge at world-famous Noma, twice voted best restaurant in the world by _Restaurant magazine. On a recent trip to Copenhagen, I could not get a reservation at Noma. No matter. I ate at some wonderful restaurants headed by talented disciples of new Scandinavian cuisine, which focuses on foraging for local ingredients and subtle herbaceous flavors.

Restaurant Herman, located in the historic Tivoli Gardens, was the best that I tried and had a standout dish of cold mussels (a contrast to the wonderful hot mussel dish at Restaurant Pierre Reboul in Aix-en-Provence that I recently reviewed).

The dish was almost too visually stunning. It came in a white glass double bowl; the top bowl contained the dish itself, while the lower bowl had dry ice, infused with chamomile, steaming out of it. Despite my aversion to molecular cooking’s overt theatricality, I found the effect to be both visually beautiful and gastronomically successful, as the chamomile opened my nostrils for the sensations about to arrive.

The blue Danish mussels themselves were small and succulent, served in a mussel bisque. Crunchy caviar and pickled cabbage provided a textural contrast and enhanced the flavors. But the herbs were the real star; taro leaves, Melissa leaves and yellow Tahitian frangipani flowers had been both infused in the bisque and also added at the end. Together with the mussels and caviar, the herbs transported my senses to a perfect summer day by the beach with flowers in bloom. A remarkable transformation for a mid-winter dish.