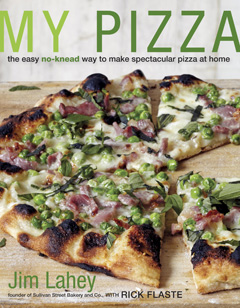 Jim Lahey started out as the master of bread. Well, actually, he started out studying sculpture but then learned the art of baking bread in Italy. When he opened Sullivan Street Bakery in 1994, he changed the landscape of artisanal bread in New York forever. Bread had never tasted that good, from basics like filone to Roman-style square pizzas. He was a pioneer and raised the bar for high-quality bread in this city. But then he wanted to also showcase his culinary skills beyond just baking bread, so he started focusing on pizzas and opened his pizzeria, Co., in 2009. In his new cookbook, “My Pizza,” Lahey shares his no-knead pizza dough recipe as the basis to all the pizza recipes. This no-knead method makes it easy for home cooks, and these pizza recipes are fun so they make for a good family activity. There’s also my personal favorite, the pizza bianca, as well as a handful of seasonal toasts, soups, salads and desserts from Co.’s menu. Check out the recipes for the dough, honshimeji and guanciale pie and pizza bianca in the recipe boxes to the right.