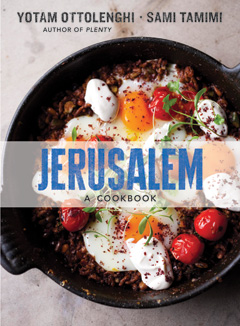 I got my copy of “Jerusalem” on the heels of returning from London, where I tried the Ottolenghi team’s new restaurant, NOPI. “Jerusalem,” Yotam Ottolenghi and Sami Tamimi’s second cookbook together, celebrates the pair’s native city; Ottolenghi grew up in the Jewish West and Tamimi in the Muslim East. The two would meet in London decades later and partner to create the city’s most celebrated Mediterranean cuisine. Despite political and ethnic differences in the Holy Land, the authors emphasize how the food of Jerusalem brings people together — their story being a prime example. I love learning about cultures through the lens of cuisine, and this cookbook gives an overview of Israel’s political and food history, making the recipes that follow so much richer and more delicious. Check out the roasted sweet potatoes and fresh figs recipe in the Recipe Box to the right for a taste of “Jerusalem.”

Reprinted with permission from Jerusalem: A Cookbook by Yotam Ottolenghi and Sami Tamimi, copyright © 2012. Published by Ten Speed Press, a division of Random House, Inc.