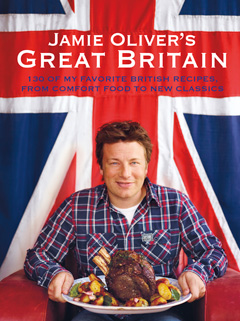 After exploring the foods of America and starting a food revolution here, Jamie Oliver must be missing his roots. His latest cookbook, “Jamie Oliver’s Great Britain,” is a nod back to his native country. Post Royal Wedding, Queen’s Jubilee and Olympics, Oliver keeps the party going with this new book that celebrates classic British recipes, as well as new ethnic cuisines that reflect the diversity of British culture — from bubble and squeak to shepherd’s pie to jerk-dressed Bristol pork. And, of course, there are plenty of baked goods recipes for afternoon tea. As always, Oliver’s recipes are simple but never boring; the book is as ebullient as his personality. For a taste, try this crackled pork belly recipe.