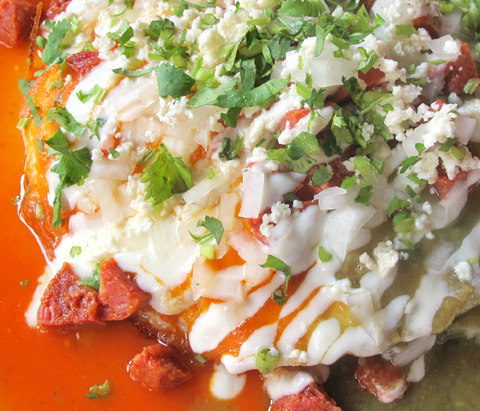 Brunch at Fonda is a fantastic deal: for $12 or less, you get a copious brunch entrée and a rosalita, Fonda Bloody Mery or mimosa to drink. But I wouldn’t recommend Fonda just because it’s a deal. I think the huevos divorciados is a steal: a dish not only beautiful in presentation but also with immense depth of flavors. Two sunny-side up eggs sit atop a crispy homemade corn tortilla and are covered in both salsa verde and ranchera sauces — “Christmas,” as they say of green and red sauce pairings in New Mexico. I love the slightly piquant flavors of the salsa verde, made from a blend of tomatillos, garlic, onions and cilantro. The contrasting red ranchera sauce contributes a sweeter and slightly spicier tone of roasted tomatoes, garlic, chipotle and habanero peppers and Mexican cinnamon. The “divorced eggs” also include black beans, bacon (you can substitute chorizo, as seen in photo above), queso fresco and crema, served with a side of rice and beans. See, I meant it when I said it’s a steal!