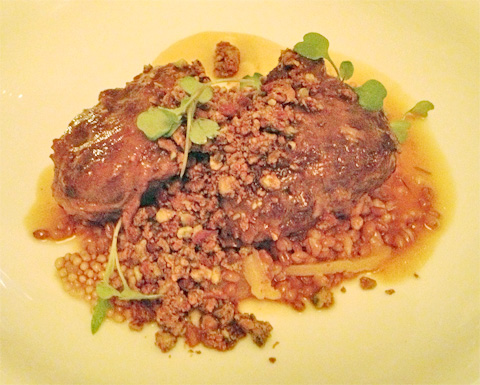 It might have been because it was a freezing Louisville night and I was starving, but the hay-braised pork cheeks on the menu at Decca seemed to call out to me like a lighthouse beacon to voyagers on a dark and stormy night at sea.

The dish is sophisticated comfort food. The pork, braised until falling-apart tender, rests in a rich but not-too-heavy sauce offset by a wonderfully nutty warm wheat berry salad. Instead of the usual potatoes or even creamy polenta, the mashed rutabaga adds sharpness, reinforcing the dish’s message: chef Annie Pettry is not playing to your average protein-and-two-veg crowd.

“Cooking in hay has been on my mind for a few weeks,” Pettry says. The age-old technique is enjoying one of its periodic revivals and seemed perfect for the sensory experience “of being on a farm in the winter, in the fields or in a barn” that Pettry was trying to evoke. She wanted the texture and concentrated flavor of beef cheeks, but in pork flavors. Hay made her think of grasses and wheat, which in turn led to wheat berries and a wheat beer for the braise. Pettry then began to consider dried fruit, specifically apricots, an idea perhaps triggered by the memory of an apricot beer. She incorporated them into the sauce, and echoed that with the addition of pickled apricots.

As for the hay, Pettry says you can get it from any reputable farm, though she prefers Timothy brand hay. She uses about a third hay, a third mirepoix, and a third braising liquid, in this case beer, vermouth, pork stock and spices.

“I knew I needed something earthy yet silky on the palate to contrast with the chew of the wheat berries, and to co-mingle with the apricot,” Pettry says. She experimented with parsnips and celery root, but decided rutabaga worked best. Her final touches were a pistachio crumble made with bacon and egg whites, pickled mustard seeds, and micro mustard greens.

It’s always amazing to me how much thought and how many different steps and ingredients go into constructing a single dish that, in the end, tastes like a seamless and harmonious whole.