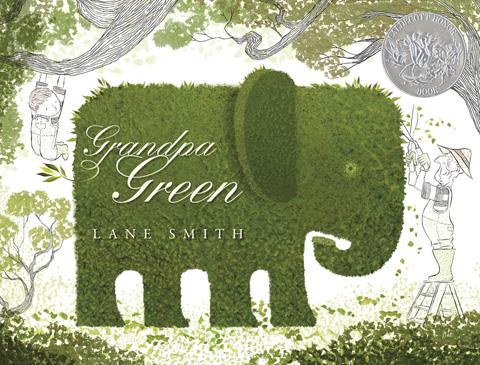 Back to simplicity, back to nature, back to story telling.

Lane Smith’s latest book, “Grandpa Green,” tells the tale of an aging great-grandfather via his love of gardening, recounting his entire life through illustrations of the greens in his garden.

The text stands out in relief against the green illustrated background on each page. At first glance, the images may seem monotone, but the storyline of Grandpa’s adventures reveals the nuance in all the shades of green. Despite its very minimal composition and language, this is one of Lane’s most moving stories. In snippets of text no longer than a tweet, the story is narrated by the great-grandson. The story’s power comes from the love, respect, and awe in his voice as he imagines himself in his great-grandpa’s footsteps. At the end we see them both on one page, and all of a sudden we realize they are two different people, vastly separated by age, but not by blood or spirit.

Who would think such a simple book would possess so much power?