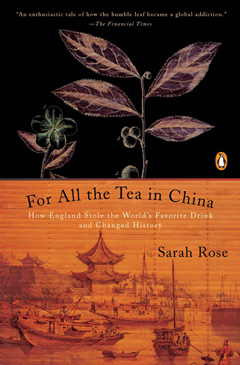 For All the Tea in China

I generally think of tea in two contexts: either a serene Oriental garden or a posh British parlor. But, until reading Sarah Rose’s For All the Tea in China, I never really considered that those two settings are halfway around the world from each other. The book’s subject — the tale of how the British stole the secrets of tea-making from the Chinese — initially put me off as something too esoteric to be interesting, but Rose humanizes the story through the main character, Robert Fortune, the botanist who adventured into China’s depths and brought back England’s national drink. Clearly well-researched, but without the weighty footnotes that often make academic history too difficult for lay people, For All the Tea in China is an engaging adventure tale about the multifaceted origins of a drink few people consider historical, but which defined the cultures of more than one nation.