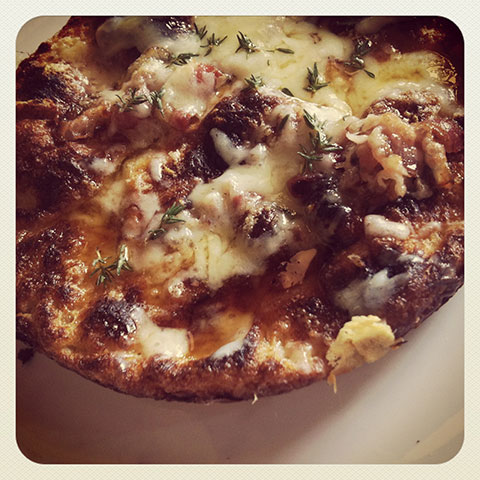 Ditch Your Preconceived Notion of a Traditional Dutch Pancake

Sometimes not getting what you want leads you to something you wanted even more than you knew. That is how I ended up discovering this savory Dutch pancake. I came to Reynard seeking one of their fantastic Scotch eggs, but they were not on the day’s menu. So, I decided to go for whatever jumped out at me: the Dutch pancake ($14)! The server assured me that it was “light,” but I was skeptical. How could a Dutch pancake with bacon and Gruyère be light? Impossible, I thought.

Not so! Light and fluffy it was! I know…how can this be? The custardy pancake had an airy texture. Cooked in a skillet, it was crispy on the outside, and even the burnt parts (reminiscent of pizza crust) were very inviting. The maple syrup atop the dish satiated my craving for some sweetness to counterbalance all the salty and savory notes in the cheese and bacon strips, and a sprinkle of rosemary added some herbaceous accents.

The best part? This dish is on both the breakfast and lunch menus, so you can have it anytime between 7 a.m. and 4 p.m. — a wide window for a walk on the wild side.