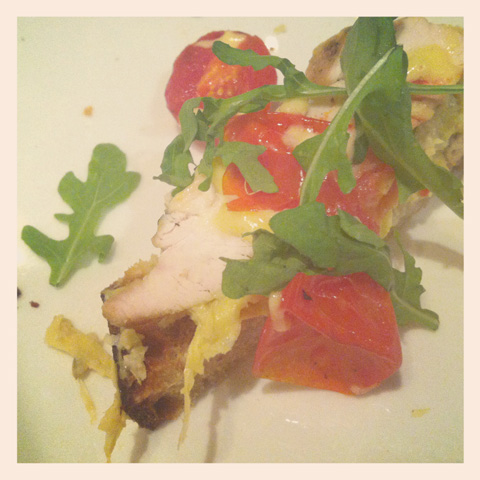 It’s not everyday that one gets to have dinner with Eric Kayser. So, of course, when I sat right across from Kayser the other night, I turned to him before deciding on my order. I have to say, when he suggested the tartine poulet & artichaut (chicken and artichoke open-faced sandwich; $16), I hesitated. Of all the dishes that spoke to me on the menu of his newly opened New York café e.g., steak tartare au couteau, soupe de concombre & menthe, coquillettes au gratin à la truffe) this was not something I would have ordered on my own. But, hey, Kayser suggested it, and who would know better, right?

Bingo! Somehow the acidity of the artichoke tapenade really works with the richness of the aioli and the flavorful herb-infused chicken slices. I appreciated the roasted cherry tomatoes as they provide a more intense, concentrated sweetness than just raw tomatoes. The arugula topping this open-faced sandwich adds a raw crunchy-and-peppery touch to complete the dish.

All these ingredients sit on a slice of boule de meule (whole grain bread) that has a tasty sourdough profile. Suffice it to say, I’ve already had this tartine twice in a week.