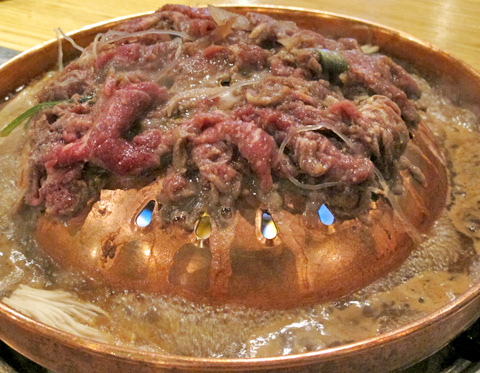 While it’s listed on the menu simply as “bulgogi,” this is different from the familiar thinly sliced, marinated, and grilled sirloin style of bulgogi. Palace Style bulgogi, which has become increasingly popular at restaurants, supposedly originated from the Korean royal palace. Instead of being grilled, the meat is cooked — in its own marinade, juices and broth along with clear noodles — at the table in a special copper ring pot, which results in very tender meat. I find the flavor of the broth and meat to be unexpectedly light and sweet. Because it’s less greasy than most barbecue choices, this could be a nice change of pace for many people. I like to pour the brothy dish over rice, mix and eat.