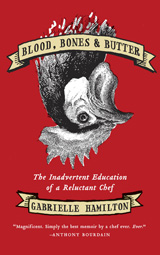 's memoir Blood, Bones, and Butter is a passionate, intimate and honest tale of Hamilton’s relationship with family and with food. The name may seem to reference the gore inside a kitchen, but as the narrative unfolds, so do her interwined loves of family and food. Blood is family, bones, how she became a chef, and butter, the icing on the cake, her love for her children and mother-in-law.

The book’s three sections, “Blood,” “Bones,” and “Butter,” flow seamlessly one to the next. During her childhood as the youngest of five siblings, Hamilton learned everything about cooking, eating and cleaning from her French mother, whom she adored. In “Blood,” Hamilton paints an idyllic picture of family through the eyes of a twelve year-old. But this perfect picture is abruptly shattered by the announcement of her parents’ divorce. The depths of her trauma unfold with the story as Hamilton is stealing and using drugs by age 13 and charged with grand larceny by age 16 after taking a job as a cocktail waitress in a nightclub.

In “Bones,” Hamilton struggles down the path to adulthood and to becoming a chef. A two-time college dropout, through these detours, Hamilton careens closer to her true identity and her love of cooking. She spends years slaving away in soulless catering factories before deciding to pursue her love for writing. So when she resolves to devote herself to this passion as a graduate student at The University of Michigan, she struggles to strike the balance between the philosophical work of a writer and the tactile work of a cook, which she does to pay her way through school.

Returning to New York with her MFA, but no career plan, she opens a restaurant almost unintentionally. Envisioning her new restaurant, she knew “there would be no foam and no ‘conceptual’ or ‘intellectual’ food; just the salty, sweet, starchy, brothy, crispy things that one craves when one is actually hungry. There would be nothing tall on the plate, […] no crab cocktail served in a martini glass with its claw hanging over the rim. In ecstatic farewell to [her] years of corporate catering, [they] would never serve anything but a martini in a martini glass. Preferably gin.” opened in 1999 and became an instant classic.

“Butter” focuses on Hamilton’s own family: her husband, two sons, and her in-laws in Italy. She marries Michele, an Italian, who pursues her, but proposes because he needs a visa. But the true focus here is Hamilton’s amour for Michele’s mother, Alda, who lives in Rome. Though they cannot communicate verbally, they communicate through cooking together. Alda is the mother that Hamilton would have been cooking next to if not for the devastating implosion of her own family. While she has a cold marriage with Michele, her sons and Alda are so precious to her, and carry her through the difficult marriage.

Foodies will relish this book. Readers will become intoxicated by Hamilton’s descriptions of food and cooking. With the compelling narrative of Hamilton’s family life, the book reads like a novel rife with emotional undertones. While some wonder why Hamilton does not explain why she did not see her mother for 20 years, the complexities of their relationship are clearly tucked between the lines. Hamilton finds female mentors and mother figures in other women and ultimately in her mother-in-law, Alda. Hamilton seems to want nothing more than to cook side by side with her mother the way she does with these women, but she is afraid of being hurt again. When Hamilton visits her mother after 20 years, she exclaims: “We drove on at impossible harrowing speeds, toward the sticky netting of my mother — a black widow spider at the center of her one-hundred-acre web — and my certain poisoning. I am thirteen all over again.”

Blood, Bones, and Butter is a tour de force, a book that no food lover should miss. Not only about the inadvertent route Hamilton took to becoming a renowned chef, but it is also about the universal connection food brings between people, whether in the kitchen, at home, at a restaurant, or in a foreign land.