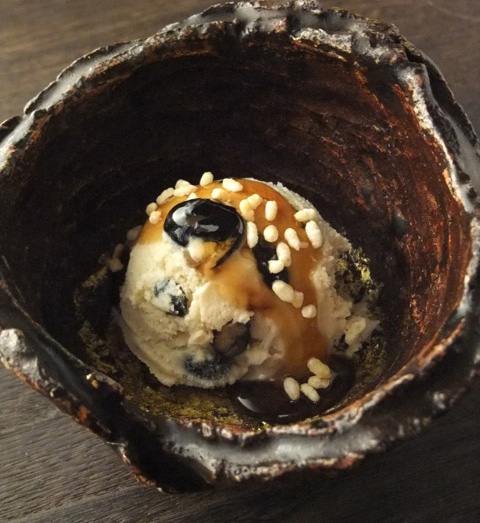 Chef Kimio Nonaga is a third-generation master at this venerable Tokyo restaurant, as well as a former Iron Chef Japan. A traditionalist, he innovates within the bounds of his country’s own ingredients. Yet he has been known to occasionally borrow from the culinary vocabulary of the West; the fact that he serves dessert at all, instead of simply seasonal fruit, is a departure from strict Japanese tradition. Nonaga’s signature ice cream is an example of such experimentation. He begins with plain vanilla, lets it soften, then adds cream, kinako (the soy bean powder often sweetened and used to coat rice cakes) and black beans. He finishes the dessert with a typical Japanese kuromitsu, or brown sugar syrup, and crunchy puffed rice. For Westerners, the dish might evoke the richness of peanut butter or caramel, while Japanese will discern the ancient and familiar flavors of wagashi (Japanese rice and bean confections). Both will wind up at the same place: blissfully satisfied.