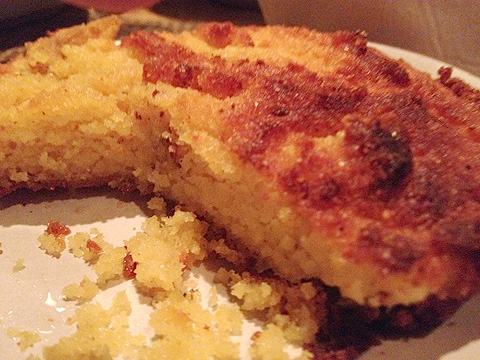 I have never tasted cornbread as exceptional as Benton’s bacon cornbread at Husk. You might think that cornbread is just a side dish, but this simple little dish is an example of how Chef Sean Brock pays tribute to soulful Southern cuisine by bringing it to new heights. Husk was named the number one Best New Restaurant in America in 2011 by Bon Appétit. Brock enlivens traditional dishes with ingredients of extraordinary quality. Anson Mills yellow cornmeal is vibrantly flavorful and produces a spongy and crumbly cornbread, but it wouldn’t be the same without the use of Benton’s thick-cut bacon bits and bacon fat. Cooked in a cast iron skillet for eight minutes at 800 degrees, this cornbread is dynamite. You’ll have missed seeing the sizzle of the bacon fat hitting the pan in the preparation process, but you will certainly feel that sizzle on your tongue when you taste it. After this experience, I am convinced that cornbread needs bacon; it not only adds flavor but the grease gives the cornbread the perfect moist texture.