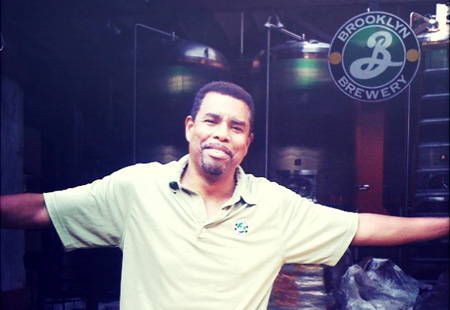 What’s Brewing in My Backyard?

Serendipity. Just two days after my recent move to Brooklyn, I happened to meet the publicist for Brooklyn Brewery while walking home one night. Two weeks later, I scored an interview with famed brewmaster Garrett Oliver at the brewery’s headquarters, only one block away from my new pad in Williamsburg.

Our meeting started on the right note, when Oliver thoughtfully chose three bottles of beer for me to taste — all in 750-ml bottles, made in a process similar to the second-bottle fermentation in champagne making. Oliver explained that, in beer jargon, this method is called “full-bottle conditioning.” Just as with champagne, refermentation in larger bottles is often superior. Plus, it makes for good presentation and encourages sharing. Oliver added playfully, “Why should champagne get all the fun?”

I proceeded to tell Oliver I had recently brought a bottle of Fantôme’s farmhouse ale to a Twitter wine dinner. He became very animated. “That beer is totally outside of its style. It bears little resemblance to other Saisons, and is therefore fairly unique. It’s like saying you had a rosé by Lopez,” he explained. I couldn’t believe it: that’s exactly what we had that night — the Fantôme and a 98 Lopez rosé! Wow, I thought, the beer man knows his wine.

Indeed, Oliver is the Beer Man of all beer men. He is the editor-in-chief of the soon-to-be-definitive guide on beer, The Oxford Companion to Beer, forthcoming in 2011 from Oxford University Press. I asked Oliver why such a serious reference guide is only now being published. Oliver explained, “When Oxford first approached me, I turned down the project as I already had my hands full and knew this would be another full-time job. But, later, I realized that a serious beer guide is missing and I had to do something about it, so I agreed to be the main editor of the project. Also, I think the public has finally realized that the microbrew phenomena is not a fashion trend, it is here to stay.”

Now, back to those three large bottles: Oliver popped open the Sorachi Ace first. The honeyed flavors of its hops really sang with me. The Sorachi Ace is a rare hop originally bred, in 1988, by the Sapporo Brewing Company of Japan. Today, it is grown exclusively at the Virgil Gamache Farms in Oregon. The Brooklyn Brewery Sorachi has been highly popular and Garrett assured me that it will make a reappearance next year and most likely stay on permanently.

I was curious about the story behind the next two bottles — the Local 1 and Local 2. Brooklyn Brewery is the “local” brewery for Brooklynites, and since both Local 1 and Local 2 fall outside of a particular style guideline, naming them simply “1” and “2” solved that conundrum.

Oliver elaborated, “Local 1 takes some inspiration from the Belgian Strong Golden, Saison, and Tripel beer styles.” We also touched upon food pairing with the Local 2. The Beer Man was very keen on pairing it with richer dishes, often with a caramelized finish, such as seared scallops with brown butter, foie gras, carbonara, monk fish and pancetta. “These are rich dishes and the fine pin-point carbonation of the beer provides the cutting power you want without being overwhelming,” Oliver said. “A beer like Local 2 gives great opportunities for harmony in your pairings. In the case of the foie gras, you can easily follow up with a wine for your next course.”

I’ve been fascinated by the current surge of interest in vintage-dated beers and the many commonalities between . Oliver confirmed that vintage beer is becoming more popular every day. Whether or not this new interest is a passing fad or is here to stay, Oliver says it is a little “problematic, because everyone wants the beers, but there’s not much back catalogue to be had.” He thinks vintage beers “will remain a niche — just as older wines are a niche. But a tasty and well-respected niche.”

The day after our interview, I happened to run into Oliver at Terroir TriBeCa wine bar. He was having a Riesling but then spotted a cocktail on the menu made with his Brewmaster’s Buzz Bomb beer — the “Port of Funchal.” Of course he had to order it. I witnessed his first sip, and he seemed surprisingly pleased. “I thought it was very good,” he said. “It brought the floral honey notes of the Buzz Bomb out nicely and made good use of the carbonation as well. I think inventing beer-based cocktails takes real skill. You don’t want to use the beer just for the sake of doing it.”

A few days later, my Brooklyn Brewery good fortune continued. I was craving beer when I walked into my oyster class by Nellie Wu of W&T Seafood at The Brooklyn Kitchen Labs, only to discover that we were going to be tasting them alongside the Local 2. From my backyard to beyond and then back home again, the Brooklyn Brewery keeps hopping up everywhere.