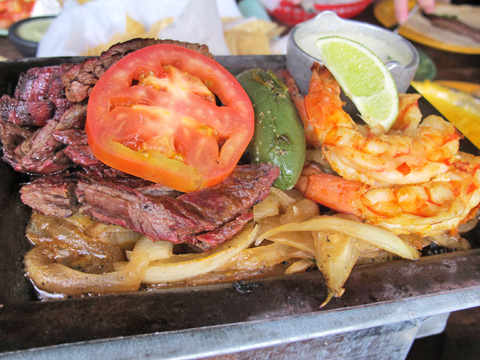 I have fond memories of loving fajitas as a kid — the thrill of the dish arriving a la plancha, and the fun of eating DIY. So it was with great enthusiasm that I tried fajitas again on my first visit to Houston at the place where they were popularized, The Original Ninfa’s on Navigation. (Ninfa Rodríguez Laurenzo built the restaurant from a taco stand into an empire, but the chain went bankrupt and is no longer owned by the family.) However, I completely failed to fathom what was so great about this dish that I once loved, and I cringed at all the large portions and the “fake” margaritas. I wasn’t being a snob; I simply didn’t get it. This time, Misha Govshteyn of Tasty Bits, Houston’s resident food blogger, took me to El Tiempo Cantina, which is still owned by the Ninfa family and now has three locations. At El Tiempo, I finally experienced that same wow-factor I remember from childhood. The two most important elements in these fajitas were fluffy tortillas and the right cut of beef, outside skirt steak*, which arrived juicy and on a large grill. At long last, I finally understand the joys of Tex-Mex. And I’ve learned to just let fake margaritas be fake margaritas.

*Outside skirt steak looks like a belt, hence the Spanish name “faja,” but in recent years, American outside skirt steak has been predominantly exported to Asia due to the high prices it can command. This has resulted in many restaurants now using the rougher inside skirt steak as a substitute for beef fajitas.