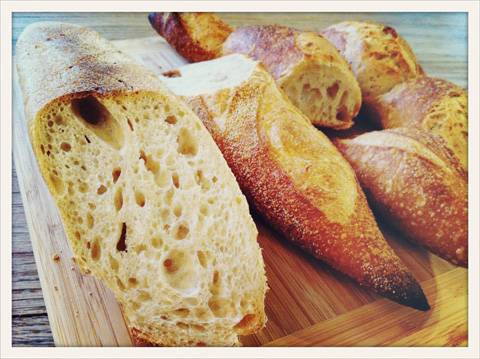 I love a good baguette, but it is a feat to find any comparable to those in France. Rather, it was until Eric Kayser opened his first bakery stateside this month. Now, at Maison Kayser, you can find those beautifully crispy-crusted baguettes that release that swoon-worthy smell of gorgeous levain once you cut into them. Kayser explains the keys to recognizing a good baguette: First, the holes in the bread should be vastly varied in size, which is a sign of fermentation. Second, the color of the bread should be cream, not white, which shows that it has kept the pigmentation of the flour. Third, when you smell the bread, you should smell the delicious aroma of the levain. Finally, listen to your baguette: put it next to your ear and squeeze the crust. You should be able to hear the crisp crunch. Voilà! Like most good things, it seems so simple, doesn’t it?