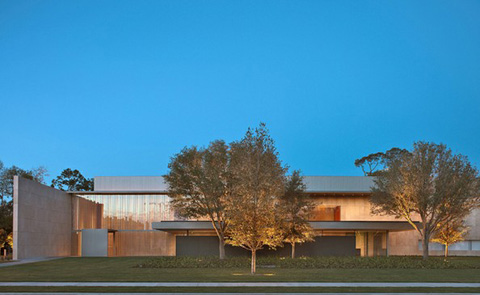 The Asia Society Texas Center was established in 1979 as an organization to help educate and forge closer ties between Houston and Asian cultures and institutions. More than three decades later, in April 2012, the Center opened its new headquarters, a 40,000-square-foot, two-story Center designed by Japanese architect Yoshio Taniguchi (who also renovated the MoMA). From the outside, the beautiful building both stands out and melds with its surroundings — something only the Japanese are so good at doing. Only two stories tall, the building does not draw attention from far away, but close-up it dazzles the eye. You’ll notice the changing colors of the lighting coming through the glass windows on the left side of the façade seamlessly melding with the light reflections bouncing off of the Jura limestone on the right — beautiful, especially in contrast to blue sky. Inside the building, every nook gives a different feeling of serenity, from the entrance to the staircases, performance art center and sculpture garden. And don’t forget to check out the exhibits. For modern architecture buffs, the Center is a sight not to be missed.