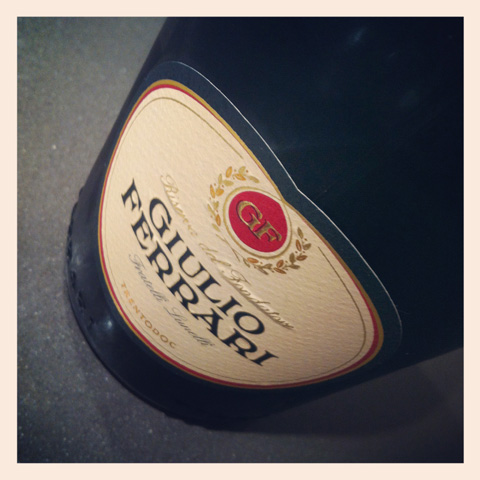 Deep amber yellow. The color is the first give-away that we’re talking age here. Of course, the 2001 vintage on the label of the Giulio Ferrari Riserva del Fondatore ($100) already shouts out, “I’m 11 years old!” But sometimes sight and taste speak louder than numbers. Neither life nor wine are logical!

Ferrari is a sparkling winery after my own heart for the simple reason that it prizes chardonnay. In fact, its basic brut is a blanc de blancs. And the rest of its line consists of variations on this stylistic theme, the top-of-the-line Giulio Ferrari — named after the founder of the house — being the most voluptuous and intense version of this theme.

The mere fact that the Giulio Ferrari is aged for a minimum of 10 years before release says a lot about the intentions behind this line: rarity, luxury, joy. Rarity because it’s always an illogical business decision to keep a wine parked in the cellar longer than the appellation requirement. It’s always a stylistic decision rather than a practical one. Luxury because wines that have been perfectly aged, stored and released when they are ready to drink account for such a small percentage of the market. Anyone who has had the “luxury” to indulge in older wines will tell you it’s a path to addiction. Joy because this is no fresh babe, but a confident woman. There’s no mistaking the two. There’s no awkward moment in the interaction. The conversation flows, inspires and keeps your attention.

I have a penchant for single-vineyard sparklers, so it should be no surprise that this wine comes from the Maso Pianizza vineyard in Trento, 600 meters above sea level. Think a pot of honey, some sea salt, roasted nuts, preserved yellow fruits, incredibly chewy and creamy texture. Irresistible.

Tasting
A terroir-driven blanc de noirs that is an elegant version of the alpine pinot noirs.